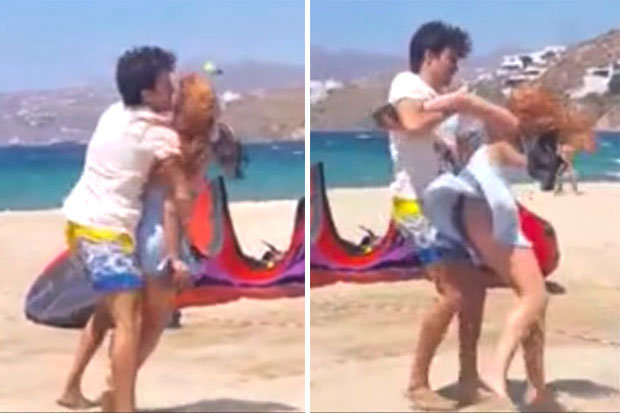 DISTURBING footage of the physical abuse that contributed to Lindsay Lohan breaking off her engagement to Russian playboy Egor Tarbasov has been surfaced.

Lindsay, 30, and Egor, 23, were on a romantic getaway on the Greek island of Mykonos when they broke into a huge fight on a beach.
The footage – filmed by the driver of a car parked behind them – shows a secluded Mediterranean beach.
The pair are parked in a 4x4 when suddenly a phone is hurled from the vehicle.
They both open their car doors and Egor quickly jumps out and makes his way across the sand to Lindsay's side of the vehicle.


The actress dashes out of the car after him to grab the phone lying in the sand.

But within milliseconds of picking it up a hot-tempered Egor slams his chest into her from behind, shouting: "Give me my phone."
As Lindsay screams "No, no!" the Russian forces her into submission by putting an arm across her throat and locking her right arm behind her.
Disabled by her fiancé she then throws the phone into the sand saying: "No, that hurt."
The furious young businessman retrieves it from the ground and shouts: "Now go – leave!"
But the redhead refuses, saying: "No, it's my car as well."
She then climbs into the jeep and waits.
After pacing around the beach for a few moments the Russian shouts, "Lindsay that is it" before making a call.
It is unknown what happened next.