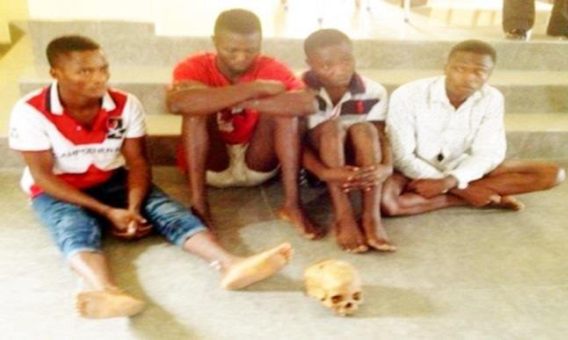 Four teenagers have been arrested in Mbo State Local Government Area of Akwa Ibom State when they went looking for a buyer of a human skull in their possession.

The Akwa Ibom State Police Public Relations Officer, Delia Nwawe, said the suspects were arrested by officers of the Criminal Investigation Department(CID) on receiving an alert from vigilant youths in the area.
The alleged leader of the group, Emmanuel Edet Ikot denied the accusation, claiming that he only stumbled on a human skull while working at an uncompleted building for a man who had paid him to cut grasses.

"I was paid to cut grass and clean up an uncompleted building by one man in Oron. As i was clearing the place i stumbled on a human skull. I then rushed to inform my friends of what i found and in the company of those my friends, we went to pick the human skull.After picking it,we decided to sell it, but we did not know of any possible buyer. So, it was suggested by one of us that we take it to a native doctor in Mbo.The four of us went together,but on our way, we were held by the youth leader of Mbo. After the skull was found on me, he called the police to arrest us.That is why we are here. I have not sold human parts before."

Ikot and other suspects, Ubong Udong (18) from Oron, Bright Effiong Okon (19) from Orukim in Mbo LGA and Okon Ita (20) also from Orukim have been in police custody and are waiting to be charged to court for trading in human parts.