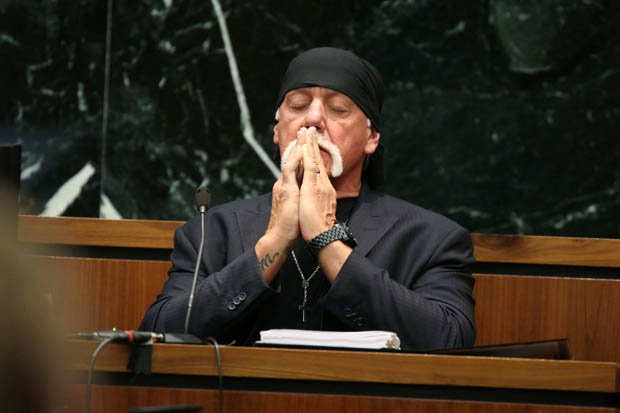 HULK Hogan is in talks to reach a settlement for his leaked sex tape.

The former wrestling champion is set to bag a whopping $140m, which is the equivalent of around £97m.
Hulk – whose real name is Terry Bollea – had originally sued for $100m but this was bumped up an extra $15m after a jury decide it wasn’t enough.
The extra dosh is made up of $15m from Gawker Media and $10m from site owner Nick Denton.

The editor A.J. Daulerio, who was responsible for posting the tape, must cough up $100,000.


Hogan will scoop $55m for economic injuries and $60m for emotional distress.
However, Gawker Media is paying the ultimate price for its failings, as they are now going bust.

In a statement, Gawker said: “We’ve been hearing these rumblings many times over the years when the judge ordered settlement discussions, and you know where we are now despite that.”
In March, a judge found Gawker and Mr. Denton guilty of invading Hulk’s privacy by publishing a video.
It was then revealed that PayPal founder Peter Thiel has been financing Hogan’s legal plight, having had a personal vendetta against Gawker as they outed him as gay on their now-defunct Valleywag blog.

When the judge in the case upheld the ruling in May, it forced Gawker to file for chapter 11 bankruptcy protection.
The sex tape was with wife of the 62-year-old's pal Bubba the Love Sponge Clem, a radio DJ.
The clip was reportedly watched 2.5m times on Gawker.