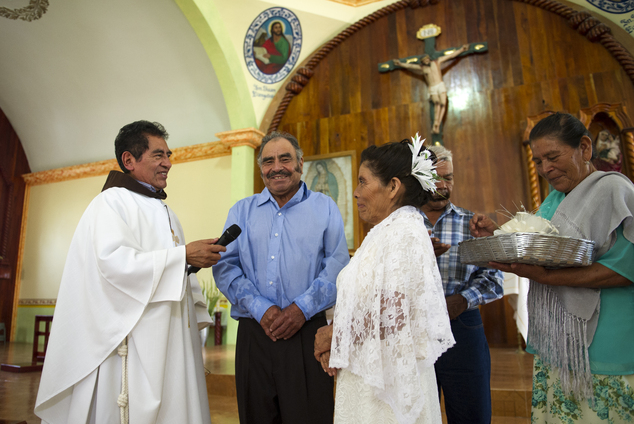 A Mexican couple together for 46 have finally been able to have a religious wedding after the Pope reformed laws that made it hard for divorcees to remarry.

Pablo Ibarra, 75, and 65-year-old Francisca Santiago wed at a church in the little village of Santa Ana in the southern state of Oaxaca.

The couple were joined together in a civil ceremony in 1970, but because the process for annulling Mr Ibarra's first marriage was so complicated they thought it would not be possible to confirm their union in church.

But after Pope Francis brought in the simplified rules on December 8, 2015, Mr Ibarra was able to convince a bishop to have his first marriage annulled.

Mr Ibarra and Miss Santiago wed on July 23 in front of 250 family members and friends.

The ceremony was presided over by Reverend Domingo Garcia Martinez, who had helped Mr Ibarra in his negotiations with the bishop.

After receiving the sacrament, Miss Santiago pulled in the priest for a big hug while a nose-wrinkling smile lit up her face.

'It was beautiful, everything I hoped for,' she said. 'Now we are together with the blessing of God.'