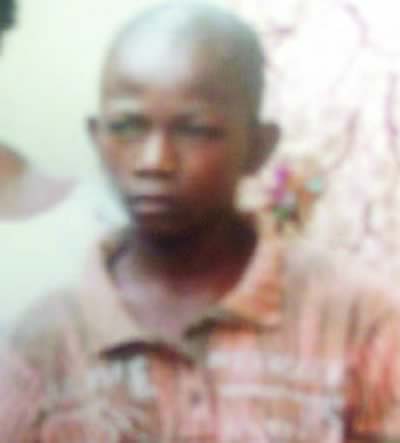 A birthday party on Kehinde Street in the Ajegunle area of Lagos State turned bloody when some guests began a fight and stabbed a schoolboy, Endurance Augustine, to death.
Policemen from the Ajeromi division were said to have removed Endurance’s corpse and deposited it in a morgue.
PUNCH Metro learnt that Endurance had gone to the party with some of his friends, when a fight broke out.


A resident told our correspondent that the cause of the fight was unknown, adding that the hoodlums, who were guests at the party, fled after stabbing the victim to death.


It was gathered that two suspects, who were trying to hide the victim’s corpse, were apprehended by residents and handed over to the police.
When our correspondent visited the area, Endurance’s mother, who did not want her name in print, said she had gone to a church service at 4pm on Wednesday only to hear the news of her son’s death on her return.
The mother of four added that if Endurance had told her that he was attending a party, she would have dissuaded him from going as the area had been tense.
She said, “I don’t think Endurance had a quarrel with anyone before he was stabbed to death. He did not inform me that he was going to a birthday party. He was an easy-going boy. He went to school every day and ought to be in the senior school by September. I am pained that my son was murdered. I don’t even know who organised the party.”
A resident, who identified herself only as Mary, said she was in her shop when she noticed a crowd of youths trooping into the street.
“Their dressing did not show good manners. In fact, some of them came to the front of my shop and smoked hemp. I warned them to stop and asked them to leave my premises, but they ignored me.
“It was on the following day that I was told they fought and a boy was killed,” she added.
A witness, who spoke on condition of anonymity, said, “I learnt that the birthday host was a lady. She used to stay with her parents on Kehinde Street. She decided to come on Wednesday to celebrate the birthday.
“I was in my house eating when I heard people shouting that they were fighting on the next street and a boy had been killed. Everyone quickly shut their doors until policemen came. They took the boy’s corpse away. A tricycle was also set ablaze by the thugs.
“What began as a birthday party resulted in a street fight. Gang fights are becoming rampant now in Ajegunle. The police should strengthen security in the area.”
The Lagos State Police Public Relations Officer, SP Dolapo Badmos, confirmed the incident.
She said, “Rival cults engaged each other on the streets and the police mobilised to the scene. A corpse was found and deposited at the Ajeromi General Hospital for an autopsy. Two suspects were arrested at the spot and efforts are on to arrest other fleeing suspects.”