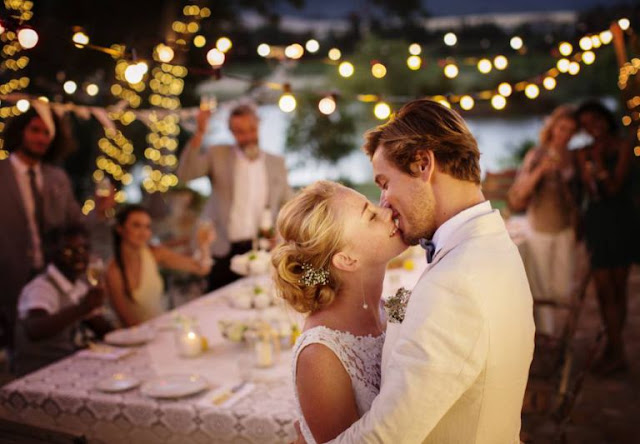 The wedding cake is hard and stale, you’re still picking stray confetti out of everything and the wedding gifts are stocked away in cupboards never to be seen again  (notice that everyone totally ignored your John Lewis gift list?). So what happens now?

Congratulations – you and your spouse are all set to commence that perilous but beautiful journey that is married life.
They say that the first year of marriage is the hardest; there are adjustments to be made and points to be proven to any doubters you had. It’s an eventful and mixed year and here is everything you can expect to happen:

1. You will get excited over your new titles. You will take a thrill out of introducing your new life partner as your husband or wife as opposed to your fiance and if you now have a new surname, you will smugly call up the banks and phone providers to inform them that someone finally put a ring on it. You will also spend a ridiculous amount of time perfecting a new signature.
2. You will discover new habits. If they had informed you before-hand that they wear the same underpants two days in a row, would it have altered your decision?

3. You will get a pet together. A cat is to a newly married couple is what training wheels are to a bike. If you can’t keep a cat happy and healthy, then stock up on plenty of condoms – you aren’t ready for a baby.

4. Speaking of which, baby talk WILL be on the agenda. The thrill of doing something as grown up as marriage makes you excitable to take the next step. Ovulation apps will be downloaded, you will interrupt TV shows to point out what a lovely name that would make for a baby and you will spend a fortune in Holland and Barrett on vitamin supplements to give those swimmers and eggs a chance.

5. Your first significant fight will have surprising results. It’s a fright when you have that first major argument – you fear for your entire marriage as you haven’t yet realised how common the bickering will become. So afterwards, you will engage in the best make-up sex ever and enjoy mutual presents, favours such as massages and meals and the swapping of love letters saying you’ll never fight again. Don’t get used to it – by year five it’s all stubborn silent treatment.

6. You will dismiss rumours. People telling you that marriage gets into a boring routine and that the honeymoon period doesn’t last just never knew how to do the matrimony thing like you and your other half do.

8. You will pinch yourself. Whoa, I’m actually married!? Me!?

9. And you will feel old. Last thing you remember, the beat was dropping in your nightclub days at age of 18. Now you’re married to someone and have responsibilities and stuff. Scary – but also quite nice. It will take the whole first year to get your head around it all.

10. You will try and liven up sex by being experimental. In a desperate bid to prove the rumours wrong that married sex gets samely (what’s wrong with missionary every Thursday between the two episodes of Emmerdale?), you will do everything you can to prove how kinky you both are. Guys, it’s not necessary yet. The first year is peak time for ‘normal’ sex. Emergency ‘kick start the bedroom action’ procedures should only be engaged at year ten when everything has dried up.

11. You will have a routine. It will take a while to fit into a mutual routine that works for you both and you might start to worry that it’s bad to fall into one.  But actually, routine is one of the best things about marriage and you wouldn’t half miss it if it wasn’t there. Nothing wrong with wake, work, gym, bath, dinner, soaps, Netflix, sex, sleep, repeat.

12. You will be fine excreting in front of each other. Look, you’ve promised your whole life to this person and made some pretty hefty vows. If your spouse wants to brush their teeth while you’re on the toilet, it’s no biggie. You share everything now.

13. Money becomes a terrifying issue. Sharing money is scary. Having a joint account makes you feel like a grown up but the associated problems of budgeting and fair spending and saving can be a headache when you are getting used to them in those first months. No more dipping into the funds when you fancy getting a boxset – consult bae first.

14. You will try and recreate your honeymoon. It was AMAZING – let’s face it. You were on a high, it was probably mostly paid for by other people and the passion was off the scale. No weekend in Whitby will match it – so don’t build it up to be like that. Breaks away will be very important nevertheless and while they’re not the same as your fortnight in the Bahamas, there’s no reason it can’t be just as good.

15. You will get annoyed at the in laws. As you tried to snare your husband or wife, you did everything you could to butter up their parents and agreed with every word they said. Now, you feel you can express your feelings on their faults and you will find yourself becoming more assertive. So long as you’re not unreasonable (come on, they’re still your parents in law), they will respect you more for it and you’ll end up getting even closer and becoming a big family.

16. The first anniversary will be a BIG thing. But you will be disappointed by the fact that only you and your spouse will make a fuss over it. You might get a few cards and Timehop posts on your Facebook but you got your big attention on the day. Still, it was never about that, it’s just about the two of you. And that first anniversary night is pretty magical. You have done a whole year!

17. You might wonder if you did the right thing. It won’t always be easy and you’ll occasionally question your judgement…

18…but it won’t take you long to get your answer. It’s a very fleeting doubt and just spending time in the company of this human being you love unconditionally means that marriage was the best decision you ever made.


And if you enjoyed that first year – think how many more you have ahead.