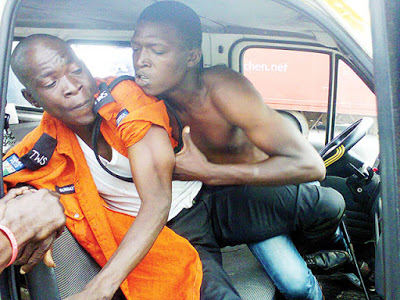 There was pandemonium at the Omole bus stop on Oba Ogunnusi Road in the Ojodu area of Lagos State on Tuesday after a traffic warden, Sunday Charles, engaged in fisticuffs with a motorist, identified only as Kingsley.

PUNCH Metro learnt that Kingsley, who was stopped by a team of traffic wardens at the junction, was allegedly beaten up by Charles for refusing to part with N50. The motorist lost three front teeth during the brawl.

Their correspondents gathered that Kingsley and some people in the bus manhandled Charles and threatened to drag him to the Ojodu Police Division for the assault on the driver, before some pedestrians advised them against reporting the incident.

At about 11.30am, Charles, who was with three female officers and four officials of the Lagos State Traffic Management Authority, had stopped Kingsley’s vehicle at the junction.

The traffic warden allegedly demanded N50 from the motorist before he could let him go. It was learnt that trouble, however, started when Kingsley claimed that he had earlier given N50 to the warden, adding that he would not give him another until evening.

Charles, who allegedly insisted on collecting the money, was said to have dragged Kingsley down from the vehicle and punched him in the face, during which the motorist’s three teeth fell off. 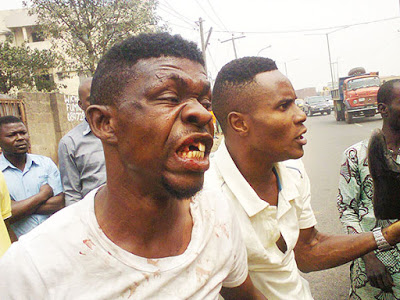 It was gathered that Kingsley held the warden and demanded medical treatment. A large crowd was said to have gathered at the scene and tried in vain to separate the warden and the motorist who held each other’s clothes.Speaking with PUNCH Metro, Kingsley said he refused to allow Charles to go because he had injured him.He said:

“I am a commercial driver. The warden stopped me about 8am and I gave him N50. So, I was surprised when he asked me again.

“I was going towards Agidingbi Road when he stopped me. He demanded another N50. I refused, saying he should wait till evening. He dragged me from the bus and started punching him on my face.

“My mouth started bleeding. I realised three of my front teeth had fallen off. So, I grabbed his uniform. People bundled him inside my vehicle and said I should take him to the police station.

“His colleagues and LASTMA officials stood away during the altercation because he did not listen to them. I suspect the warden was drunk because of the way he dragged me from my vehicle.”

A pedestrian, who was a witness, Abiodun Dada, told Punch that other traffic wardens and LASTMA officials, who were embarrassed by Charles’ action, later calmed down enraged motorists not to protest against the incident.He said:

“It was the warden who first hit the motorist. He punched him on the mouth and yanked out some of his teeth. It was the blood gushing from the driver’s mouth that attracted pedestrians. We later discovered it was an argument over payment of N50.

“If not for the wardens and the LASTMA officials who begged angry motorists, the gathering could have turned violent.”

Another pedestrian, whose shirt was bloodstained as he tried to rescue Kingsley from Charles, said,

“As people dragged the warden inside the vehicle, his trousers were torn, and buttons of his shirt also fell off. We wanted to report him at the Ojodu Police Station, and to demand that he should take Kingsley for treatment at a hospital.

“But when we saw that his uniform had torn, we advised Kingley to let him go and leave the matter to God. We suspected that the police could turn the matter against him for tearing the uniform of their officer and neglect his missing teeth.”

Charles was freed by the motorist at about 12.30pm.The Police Public Relations Officer, Dolapo Badmos, said it was the motorist and his condoctor who assaulted the traffic warden, adding that Charles’ uniform was torn during the attack on him.She said:

“The traffic warden was beaten by a commercial bus driver and his conductor who are still at large. His service uniform was torn to pieces. He was rescued by a team of policemen deployed in the scene. The case will be dealt with decisively.”