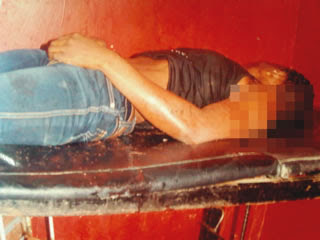 Helen Okeke has been arrested by the Lagos State Police Command for allegedly killing her neighbour, identified only as Rose, in the Ikota, Ajah area of the state.
It was learnt that Okeke slit Rose’s throat after the duo reportedly had an argument over who poured urine on the latter’s clothes that were spread on the entrance door to her room.
It was gathered that Rose, who was reportedly getting ready for her wedding, had returned from work in the afternoon, and noticed a foul smell on the clothes spread on her door.

It was learnt that the deceased went to the landlady, Alhaja Iyabo Hamzat, to report the matter. The landlady was said to have pacified her, offering to give her the money to buy some detergent to wash the clothes.
However,a short time after, other neighbours, heard Rose’s sudden cry for help in the corridor. The suspect was said to have been found holding the deceased by the neck, with a bloodstained kitchen knife in her hand.
Rose however died before she could be rushed to a nearby hospital.
The matter was said to have been reported to the Ajah Police Division, Ajiwe, and Okeke was arrested.
According to reports, Alhaja Hamzat said she had served a notice to Okeke, commonly known as Mama Chinedu, on several occasions to pack out of the house, adding that the suspect refused to leave.
She said,

“At about 5pm that day, Rose came to my apartment. She said she came to report Iya Chinedu.

“She said when she returned from her workplace, she found her curtain, towel and other clothes drenched with urine. She said she suspected that it was Iya Chinedu who poured the substance on her clothes.

“I begged Rose and told her that I would give her money to buy detergent to wash the clothes. She had hardly returned to her room when we heard screams of ‘help help!’ We all rushed there and we saw Rose in a pool of blood with Iya Chinedu holding a bloodstained knife.

“With shock, we rushed Rose to a hospital, but she died on the way.

“Iya Chinedu moved into my house just last year. She moved in with her son. The son later left, saying she was fed up with her mother. I had served her quit notices on several occasions, but she refused to move out.

“I went to the police at Ikota to report her, but the policemen there said they would not meddle in landlord-tenants’ affairs.”

Another resident, who spoke on condition of anonymity, said that Okeke had been moody before that day.
Another resident in the area, identified only as Blessing, said after Okeke had stabbed her neighbour, some angry youths beat her up.
She said,

“Mama Chinedu did not show any remorse at all. Some boys became angry and beat her up.

“Everyone was shocked, and wanted to find out what offence was committed that made Okeke to stab the young lady.”

The Police Public Relations Officer, DSP Kenneth Nwosu, confirmed the incident.
He added that the matter would be transferred to the State Department of Criminal Investigation, Yaba, for further investigation.
He said,

“The police visited the scene and removed the corpse to a public morgue in Yaba.

“The suspect has also been arrested. She will be transferred to the SDCI after the police have concluded their preliminary investigations.”