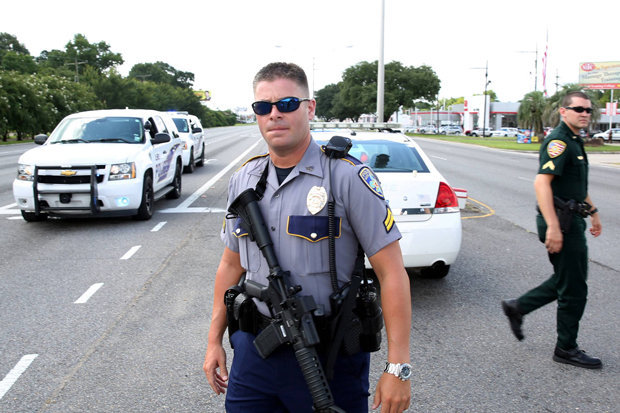 THREE police officers have been shot dead after a gunman dressed in black opens fire on cops.

A manhunt has been underway for a man dressed in black and wearing a mask who opened fire on cops in Baton Rouge, Louisiana, near Airline Highway, shortly before 9am local time.
Eight cops have shot and three are dead.
It is understood one gunman is down and another is at large.
Several streets near the state capital's police headquarters have been placed on locked down as police hunt two gunmen.


What we know so far:
A police robot is at the scene of the shooting just in case a bomb has been planted.

The mayor-president of East Baton Rouge Parish Kip Holden told CNN: "There is still an active scene. They are investigating.
"Right now we are trying to get our arms around everything.
"It’s just been one thing after another."

The injured officers were taken to a local hospital, Sergeant Don Coppola says, adding he did not know the extent of their injuries.
While the scene of the shooting was contained, police have still not taken the shooter into custody and warned local residents to stay away from the scene.
The community is being advised to stay indoors.
Unconfirmed reports say the gunman has been shot and another is still on the loose.

Alton Sterling, 37, was pinned to the ground and shot in the chest outside a convenience store in Baton Rouge, Louisiana.
His death sparked angry protests, with crowds gathering at the scene of the incident chanting "black lives matter".
The father-of-five's funeral took place on Friday.