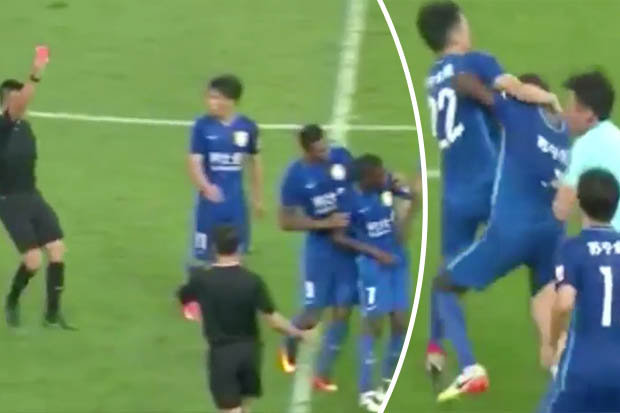 FOOTBALL fans will remember Ramires as the quiet, hard-working utility man who played an instrumental role in Chelsea’s most recent successes.

But following a big-money move to Chinese club Jiangsu Suning FC last summer, the Brazilian international looks to have found his steelier side.
With his side needing three points against Shandong Luneng to close the 10-point gap at the top of the table on leaders Guangzhou Evergrande, Jiangsu took the lead in the eighth minute thanks to a tidy finish from former Man City striker Jô.
However, their joy was short-lived as a second half brace from Argentinean midfielder Walter Montillo proved enough to steal the game for Shandong.


The excitement of the game was overshadowed by a mass brawl sparked after the final whistle, with Ramires being shown a straight red card for his role in the violence.
Incensed by the referee’s decision, the 29-year-old charged at the match official, requiring a host of teammates to hold him back.
Just as the melee seemed to have died down though, Ramires gave his chaperone the slip and made another run at the ref before being dragged away once again by Jiangsu club staff.

The Rio-born enforcer now faces an automatic three-match ban for the red card, with the possibility of further disciplinary action thanks to his outrageous reaction.
A host of former Premier League players are now plying their trade in the lucrative Chinese Super League, including Papiss Cisse, Demba Ba, Gervinho and Asamoah Gyan.