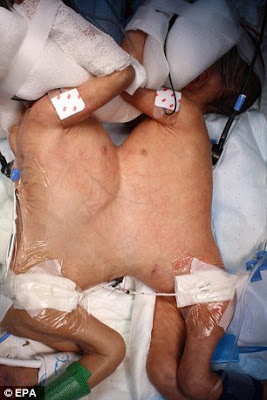 Doctors have successfully separated conjoined twin sisters fused at the liver and chest - the smallest pair ever to survive surgery.
Five surgeons, assisted by two nurses and six anaesthesiologists, carried out the successful, five-hour operation to separate the tiny identical twins at a hospital in Bern, Switzerland.

Maya and Lydia were born two months prematurely along with their triplet sister Kamilla in December.

They were initially stable and doctors at Inselspital hospital, Bern, had planned to allow them to settle after birth and separate them after a few months.
But after a week, their situation deteriorated dramatically: one suffering from hypertension and the other suffering from the opposite condition, known as hypotension.

Both conditions were life-threatening to the frail twins, who weighed just 2.4 pounds each, and the doctors decided their only chance was attempting surgery never before performed on such young infants.

Separating the babies' liver put both under massive pressure, said Barbara Wildhaber, head of the paediatric surgery unit at the Geneva University Hospital, who headed the team that carried out the surgery.

'We were prepared for the death of both babies, it was so extreme,' she told Swiss paper Le Matin Dimanche.

She added: 'It was magnificent. I will remember it my entire career.'
Since their surgery, Maya and Lydia have been recovering well, they have put on weight and have begun breast feeding, the paper reported.


The pair is among only about 200 separated conjoined twins currently living around the globe, it said.
Also known as Siamese twins, conjoined siblings are identical twins who in rare cases, about one in 200,000 live births, are born with their skin and internal organs fused together, according to the University of Maryland Medical Centre website.


About half are stillborn, and the survival rate is between five and 25 percent.
They develop from a single egg, which splits in the case of healthy twins, but not fully in the case of conjoined siblings. 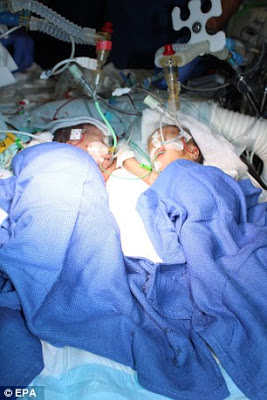 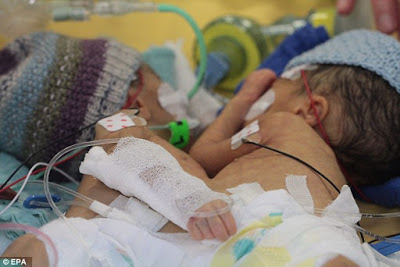