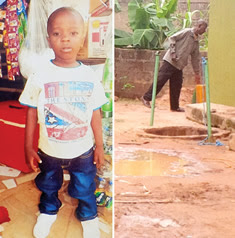 A three-year-old boy, Emmanuel Samuel, died on Sunday after he fell inside a well in front of a building on Hassan Sule Street, Ita Oluwo, in the Ikorodu area of Lagos.
The kindergarten pupil, his elder brother, Timileyin Samuel, and some of their friends were said to be playing around 3pm in the area when the deceased accidentally strayed into the well.
PUNCH Metro learnt that residents and officials of the Lagos State Fire Service, who came to the area after receiving a distress call, had difficulties rescuing the victim due to the depth of the well.

Our correspondent gathered that a member of the Oodua People’s Congress later summoned up courage and went down the well to rescue the boy at about 7pm. He brought out the boy dead.
It was learnt that the well was dug about eight years ago by the landlord of the building but was abandoned when it did not produce water.


Some youths were said to have become angry with the landlord for leaving the well open. They reportedly stormed the residence and broke some window glasses.
The landlord, Bamidele Ogunwole, was said to have been arrested on Monday after the incident was reported at the Ogijo Police Division, Ogun State.
The family members of the deceased were still wailing on Monday when PUNCH Metro visited the area.
Emmanuel’s mother, Kikelolomo, who spoke in tears, described the deceased as her “everything.”
She said, “He had brothers and sisters, but he was my everything. He was very intelligent and smart. It was his brother that rushed to tell me he had drowned.”
The father, Sergeant Abu Samuel, said what pained him most was the fact that the landlord buried his child without his consent.
“I was on duty when I was called that my son had drowned only to come back home and be told he was dead. To add insult to injury, that man (the landlord) buried my child somewhere in Agodo without my consent,” he said.
Residents described Emmanuel’s death as avoidable.One of them, who identified herself only as Esther, said,
“It is very easy for anybody to get trapped in a well that is left open like this. One of the man’s tenants told me that they had complained several times to the landlord, but he ignored them.”
The lawyer for the family, P.O. Idogun, accused the police of “foot-dragging,” adding that no relative of the suspect had shown up at the police station.
The Chairman of the community development association, Alara Ogodo, blamed the suspect for burying the child without the approval of his family.

The Ogun State Police spokesperson, DSP Muyiwa Adejobi, said the landlord had presented himself to the police.
He said, “He is in our custody. We will do something about the case.”