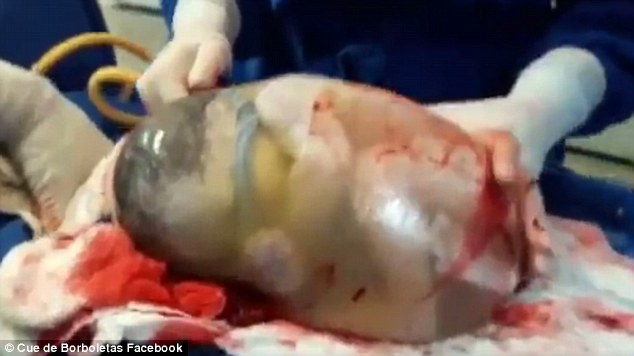 It's an incredibly rare, confronting and beautiful phenomenon all at the same time.
This is the moment a child is born while still inside its fully intact amniotic sac - known as the caul - something estimated to occur in one in every 80,000 births.
The video was taken in Spain on Saturday and captures the rare moment the baby was born with the membrane covering its entire body, just minutes after its twin was delivered normally.

The amazing video shows the newborn lying on a hospital table, curled up inside the clear sac which is tightly stretched around its body.


Moving occasionally, the baby is clearly visible inside the sac with the blue umbilical cord - through which the baby is receiving oxygen - easily distinguishable.
With its movements increasing in regularity, the youngster is seemingly ready to escape the sac and meet its little brother or sister.

Normally, the amniotic sac is broken during the strenuous process of childbirth or is pierced with a scalpel during a caesarean.
Doctors and nurses gathered around the table to catch a glimpse of what for most medical professionals is a once-in-a-lifetime opportunity.
When the amniotic sac breaks, the fluid held inside is what is described as a woman's 'water breaking'.
In less than one day the video has been watched by more than 6.8 million people.