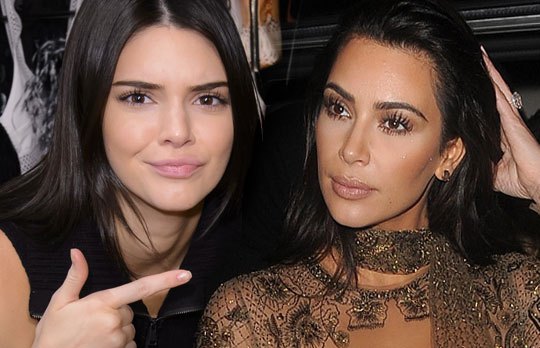 Kim Kardashian does NOT like to share the spotlight! And now that herKeeping up with the Kardashians half-sister, Kendall Jenner, landed the coveted cover of Vogue magazine this month, RadarOnline.com has learned she is NOT happy!
According to a family insider, “Kim threw some major shade at Kendall!”
“Kim seems to feel very threatened by Kendall,” the insider said.


And for good reason! The war between the siblings goes back years.
After Kardashian slammed her sister on an episode of KUWTK — claiming that she is responsible for Jenner’s success — Jenner promptly posted a photo on Instagram that became the most liked Instagram photo ever, stealing Kardashian’s record.
“Kim will never allow any of her sisters to have more followers on social media than her,” said source, adding, “Especially Kendall!”
And now, she’s won the cover of the coveted September issue of Vogue, while Kardashian only got on with Kanye West by her side.


How will Kardashian get her revenge? In recent months, the wife of Yeezy rapper Kanye West, 38, has developed a very close relationship with her young protégé sister, Kylie, 19.
“Kim used to be closer to Kendall when they were younger, but not anymore,” the insider told Radar.
“It seems like she will forever be jealous of her success!”