Singer Sia Begs Drake For A Collaboration on Twitter 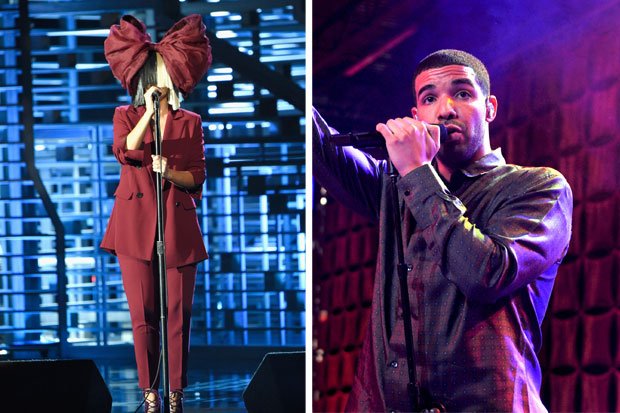 SHE is one of the biggest songwriters in the world and it looks as though Sia wants to collaborate with a massive superstar.

The Aussie songstress took to Twitter to try and get the attention of Drake.
With 33.3 million followers, it's probably not the best place to get his attention.
She said: "I'm trying to get in touch with you. I want to do something!
"Can you dm me your person? Thanks! Your fan, Sia!" 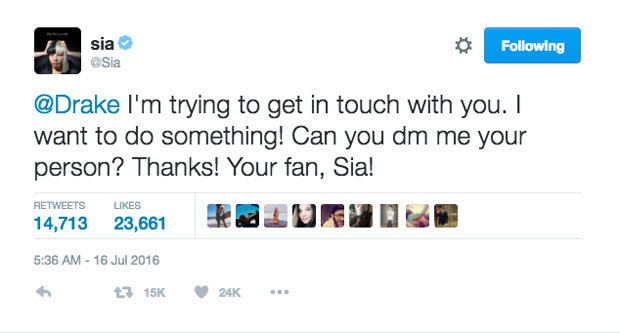 Drake has been inactive on Twitter since June 5 and hasn't yet publicly responded to the tweet.
Does this mean we can expect a Drake and Sia collaboration in the near future?
Fans understandably lost their minds with the tweet.
"YASSSSSS OMG!! WHATEVER THIS IS, MAKE IT HAPPEN!!![sic]" tweeted one enthusiastic fan.

Another said: "bout to make some dope sh**, [sic]" while a third added: "Oh, this next club banger is about to be lit!"
Drake made headlines earlier this month when he was spotted getting very close to Rihanna.
Given that Sia has worked with her on numerous occasions, we're not sure why she didn't ask Riri for his number.
Excuse us while we wait by the radio for the biggest song in the world to drop…