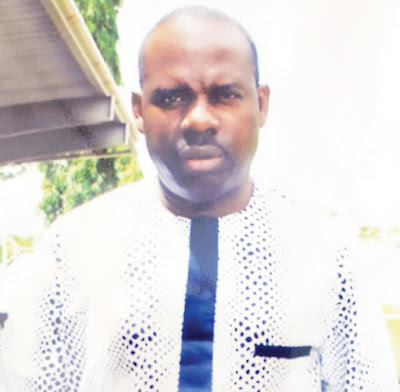 Susanne, the widow of the Chief Protocol Officer of the Minister of State for Defence, Mr. Desmond Nunugwo, has accused the Economic and Financial Crimes Commission of killing her husband and labelling him a criminal.

She explained that six hours after Desmond was taken into custody, he was pronounced dead.

She told PUNCH Metro that she had been calling her husband’s phone repeatedly but it was switched off as she did not know he was in EFCC’s custody in Wuse 2, Abuja. Susanne said,

“Around 3pm on June 9, my husband had gone to pick up our son from school and they both returned home. He later went out. Around 6pm, I called his line and it rang once. I tried his number several times later, but it was off.

“The next morning, I got apprehensive when he didn’t come home. However, around 3.48pm, someone called me with his phone and said my husband was in the EFCC’s custody and I should come to bail him.”

Susanne said on getting to the EFCC, she was told to go and get a man because being a woman, her husband could not be released on bail to her.
Shortly after leaving, the EFCC was alleged to have issued a press statement breaking the news of Desmond’s death.

She said, “The EFCC called me to their office to come and bail my husband while he was already at the mortuary.
“I later received a phone call from a former colleague of mine that he had read the news online that my husband was arrested for fraud and he had died.”

The widow said she was informed that her husband’s arrest was sequel to a petition written by one Uloma, his business associate.

Susanne said, “She (Uloma) told the EFCC that she met my husband on a flight in 2012 when he was on his way to the US where I went to give birth. She said my husband introduced her to a third party with whom she did a N91m transaction.”

Susanne berated the EFCC for labelling her husband a fraudster even after causing his death, adding that the anti-graft agency must clear his name.
The nephew of the deceased, Amaechi Ihezie, told PUNCH Metro that when he visited the EFCC, investigators told him that Desmond slumped and died.
He said the anti-graft agency denied Desmond bail even after it had been discovered that he did not receive any money from the transaction.
Ihezie accused the EFCC of being overzealous as the commission did not inform the Ministry of Defence of Desmond’s arrest or investigation even though he had been working at the ministry for over 10 years.

“The EFCC told me that before he died, he wrote a statement of four pages. They gave him his phone to make calls for about two hours and then nobody came to bail him and so they said they transferred him to their head office and that a few hours later, he started to complain of discomfort and slumped. They said he was rushed to the hospital and confirmed dead,” he added.

In a petition addressed to the Attorney-General and Minister of Justice, Abubakar Malami (SAN), the lawyer of the family, Mr. Paul Edeh, alleged a cover-up in the case.
Edeh said the EFCC had released all those, who were in detention with Desmond, on the day he died so that there would be no witnesses.

The petition partly read, “The EFCC has blatantly refused that a post-mortem examination should be carried out on the body so as not to be indicted. This may have been the reason why more than two months after Desmond’s death, no move has been made to carry out an autopsy.
“After many visits by our clients to the EFCC and the police, both agencies have maintained that Desmond died a natural death. One, therefore, wonders how both the police and the EFCC could come up with such a common position in the absence of a medical examination to determine the cause of death.”

However, the EFCC had said in a statement by its spokesman, Mr. Wilson Uwujaren, that the deceased allegedly fraudulently obtained N91m from an acquaintance after he tricked her into believing that he had high net worth business associates in Dubai, who were on the verge of buying NICON Insurance, and convinced her of their disposition to help her stockfish business.
Consequently, she allegedly wired N91m into an account, Mainage General Merchants, in Diamond Bank.

The EFCC added, “After the transfer of the funds, he became evasive forcing the complainant to report to the EFCC. Consequently, he was arrested in Utako, Abuja, at about 5.33pm on Thursday, June 9, 2016.
“He admitted to receiving the money from the complainant, with the additional information that he transferred N30m of the said money to Norway. But he could not explain the whereabouts of the balance of N61m.
“The suspect was detained at about 7.30pm, in the absence of anybody to take him on bail. Six hours later, he suddenly complained of discomfort and was rushed to the hospital where he was pronounced dead.”