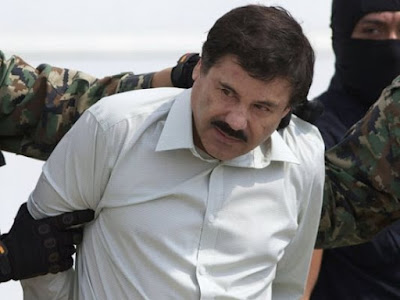 Mexico launched a manhunt Sunday after Joaquin "El Chapo" Guzman, a notorious drug lord, escaped from a maximum security prison, authorities said.
Flights near Altiplano prison outside Mexico Citywere suspended and roads and highways in the surrounding areas were being searched by security officials.
It is the second time Guzman, who ran the Sinaloa cartel that smuggles large quantities of drugs into the United States, escaped from jail.

According to USATODAY prison guards, possibly by hiding him in a laundry cart, helped Guzman escape from a jail in western Mexico in 2001.

Mexico's National Security Commission said in a statement Sunday that Guzman disappeared shortly before 9 p.m. on Saturday after going for a shower in the prison where he has been held since February last year.

Guzman was re-captured in 2014 after more than a decade on the run.

At one point, Forbes magazine estimated his fortune at more than $1 billion.

The Sinaloa cartel is a key player in a drugs war that has ravaged parts of Mexico for years and cost thousands of lives.