Miley Cyrus Hosting MTV VMAs Despite Been Banned from Performing 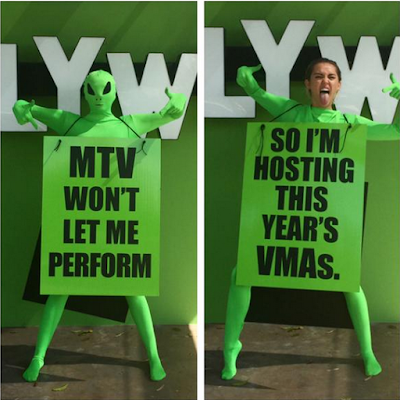 It’s two years since we covered our nan’s eyes while Miley Cyrus twerked all over the shop at the MTV VMAs.

The performance involved her grinding against Robin Thicke in a tiny nude bikini and it was all a tad jaw-dropping.

Since then the Wrecking Ball singer hasn’t been allowed to perform, but when did something like being told what not to do stop Miley?

he’s found a way around the ban and will be hosting instead. She revealed the news on her Twitter and Instagram that she’ll be the master of ceremonies, and naturally even her reveal – dressed as an alien with a sandwich board – wasn’t the average announcement.

Her 2013 performance shocked many a VMA viewer, although Miley had no idea she’d cause such a fuss.

At the time she said of her booty-shaking, tongue sticking out performance: ‘You’re thinking about it more than I thought about it when I did it. Like, I didn’t even think about it ’cause that’s just me.’

Here’s betting that standing behind a podium is definitely not going to stop her being controversial.