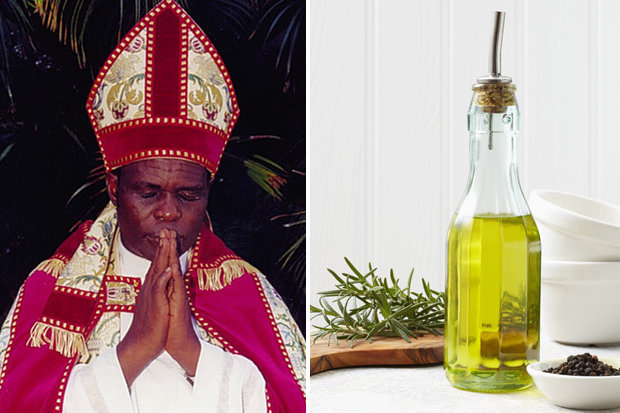 A FAKE "Archbishop" has been caught flogging olive oil from Aldi as a mystery cure for cancer and HIV.

Gilbert Deya is also fleecing church-goers with cash-for-miracles scams.
The 63-year-old, who refers to himself as the Archbishop of Peckham, was caught selling the £1.99 product from Aldi for £4.99 as a cure for disease when used on food.
According to The Sun, who carried out an undercover investigation, Deya claimed to have anointed the oil while his associate handed out leaflets detailing his "mystical powers".
Journalists working for the newspaper posed for two months as a husband and his cancer-hit wife to investigate the church.


They allegedly discovered him selling the olive oil as a cure for both cancer and HIV while charging to perform "miracles" to help infertile women conceive.
They were then taken to a room where a pastor rubbed the oil into the woman's chest.

He reportedly told them: "The oil is not any oil, as the Bishop normally prays with it.
"This oil heals thousands of people here.
"This is the start of your miracle. You could be here now and tomorrow you go to the doctor an when the doctor checks you find that the cancer is gone."
One church leaflet lists Deya's miracles – including curing a broken leg in one day by prayer alone.
Deya is even pictured talking with the Queen and Prince Philip on his church's website.

He has also faced a ten-year battle against extradition to his native Kenya.
He was arrested in 2006, accused of stealing ten children from the Pumwani Maternity Hospital in Nairobi.
Deya, though, has claimed since 2007 that he would face torture and inhuman treatment if he was to return home.