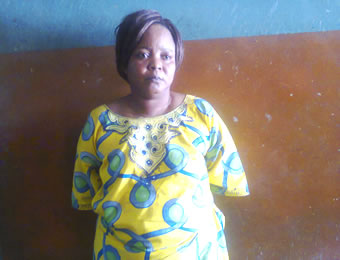 The Police in Ogun have arrested a nurse, Adebola Titilayo, for stealing a new born baby shortly after delivery in Arogun village, Ogun state in desperation to have a child for her wealthy husband.Adebola who is the proprietress of a private Maternity in Arogun community in Ewekoro Local Government Area of the state, was apprehended by Police detectives attached to the Ewekoro Division of Ogun State Police Command.She was said to have stolen the child after delivering the mother of the baby in her (Adebola) maternity last June 13.The Police Public Relations Officer, Olumuyiwa Adejobi, who disclosed the arrest to reporters on Sunday, said the suspect was arrested last Friday while the baby was also rescued safely.
Adejobi, a Deputy Superintendent of Police (DSP), added that the suspect had lied and deceived the mother of the baby that she had a still birth and that the baby was dead.According to the Police Image maker, the biological mother of the baby later got reliable information that the suspect stole her baby and the Police immediately arrested her when notified about the theft.Adejobi said:”the good sympathizers in the community noticed that the nurse (suspect) who was never pregnant suddenly started nursing a baby that she could not even breast feed. They informed the mother who later reported the case to the police in Ewekoro on 7th August,2015“In the course of police investigation, It has been revealed that the suspect, a mother of seven(7), had issues with her initial marriage and got married to another “rich” man, whom the nurse wanted to have at least a baby for him, for reasons known to her.“The police Operatives, who made professional moves, have recovered the baby alive and unhurt. The suspect has given credible statement that will assist the police and the matter will soon be charged to court.“The Commissioner of Police Ogun State, Abdulmajid Ali, has commended the police operatives for the good Job they did and directed that a proper investigation be carried out so as to get useful information required in the prosecution of the case.

” Ali has also charged owners of hospitals or maternity homes to operate legally and always employ credible and trusted nurses and staff who will be committed to their duties and respect the ethics of their professions and the laws of the land.”