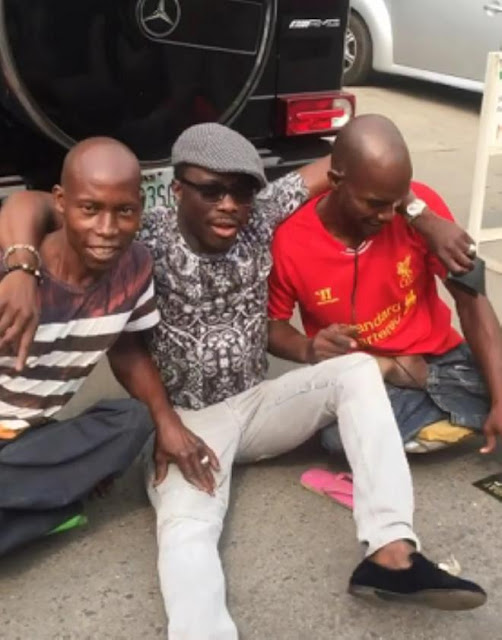 Ahead of his February 7, 'Life As I See It' concert, comedian and Actor, Julius Agwu has hit the streets to pally with crippled beggers.
The Ikwere-Rivers State born multi-talented artiste, who is known for his rib-cracking jokes and witty acts, was spotted in the midst of two handicapped beggers this morning. Apparently, Julius wants to bring them to his show to also have fun like other privileged Nigerians.
Some of the stars listed to perform that day are ace songstress, Lady Onyeka Onwenu, Timi Dakolo, Banky W, Waje, Efya, Bez, Mimicko, and popular juju act, Yinka Ayefele and other.


While guests and other fun seekers will be treated to jaw dropping jokes by British comedian, Eddie Kadi, Okey Bakassi, Senator, Dan D Humouros, Seyi Brown, Buchi, Oyinbo Princess, among several others.
The double-header concert will take place at the prestigious Eko Hotel and Suites, on Sunday, February 7, 2016 while the subsequent event will hold in Abuja on Valentine’s Day.