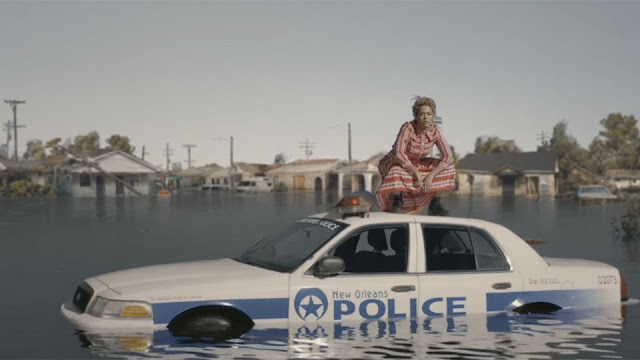 Beyonce reigned over the weekend, dropping an epic video Saturday for the new song "Formation," ahead of a planned appearance at the Super Bowl on Sunday. Controversy over the video put a dent in Queen Bey's crown, however, after a pair of documentary filmmakers complained footage from their film was used without their input.
The spat between the filmmakers and video's director, Melina Matsoukas, was quickly cleared up but underscores how borrowing and inspiration can blow up in an artist's face.
Director Abteen Bagheri and producer Chris Black released the short doc "That B.E.A.T." (contains explicit language) about New Orleans's bounce music and dance scene in 2012. Scenes from the film were used in the "Formation" video, a dreamy ode to Beyonce's roots in Louisiana and African American life.
Amid frenetic dance numbers and Southern cotillion-style costumes, the video takes on themes such as police-involved violence, Hurricane Katrina and Creole culture.

When it rains Beyonce it pours Beyonce.
One day before taking the stage with Coldplay at the Super Bowl 50 halftime show, the singer dropped her first new single since 2014.
"Formation" is available to stream and download free, exclusively through Tidal. The video features references to Hurricane Katrina, Louisiana Creole culture and a guest appearance from her daughter Blue Ivy.
The video debuted on the streaming service Tidal, which is owned by Beyonce's husband, Jay-Z.
Soon after its release, Black tweeted his disappointment that the video features scenes from his film, including a dramatic panning shot of a house submerged in water. The producer accused the video makers of not immersing themselves in local culture to shoot footage as his production team did with "That B.E.A.T."

"Why Melina gotta use clips from our doc?!?" Black asked on Twitter. "Was the budget not big enough to spend a week in New Orleans and actually build with the people."
The song features bounce's grand dame Big Freedia, who also makes an appearance in "That B.E.A.T."
"The funny thing is that our doc is lowkey iconic so the audacity to rip and pass it off like we not gonna notice. You outta touch b!" Black wrote.
CNN.
Follow Me On Twitter & Instagram: @effiongeton
Posted by Unknown at 10:15:00