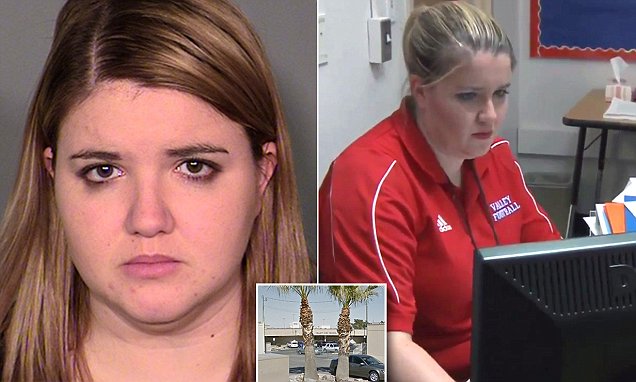 Another freaky pedo teacher has been caught smashing a student in her care — this time one with a limited understanding of what exactly it is he was getting into. A Las Vegas special education teacher recently victimizedone of the developmentally challenged young men in her care at a local high school.
MailOnline: A special education teacher has been caught having sex with a 16-year-old student inside a classroom, according to police documents.
Married 25-year-old Jillian Lafave was arrested after a hall monitor allegedly caught the two during school hours at Valley High School in Las Vegas, Nevada, News 3 reported.


According to KTNV, the arrest report also stated that Lafave had exchanged more than 13,000 text messages with the student, who had a learning disability. Some of the messages were allegedly sexual in nature.
The police documents stated the student would call his teacher ‘mom’ while she would refer to him as her son. Lafave, however, told the teenager through texts that he should not call her mom when they were talking about sex, the report states.
Lafave, who was arrested earlier this month, told the police that she had kissed the student and touched his penis, but denied having sex with him. He had tried touching her genitals, but she pushed him away, according to the arrest report.
The teenager had posted numerous photographs of himself with Lafave on social media, and told police he loved her when he found out she had been questioned.

Lafave was charged with performing a sex act with a student and is scheduled to appear in court at the end of March, but she’s currently out on bond and on PAID leave from the school.
SMH! You would think her punishment would be harsher considering how vulnerable the child in question was.