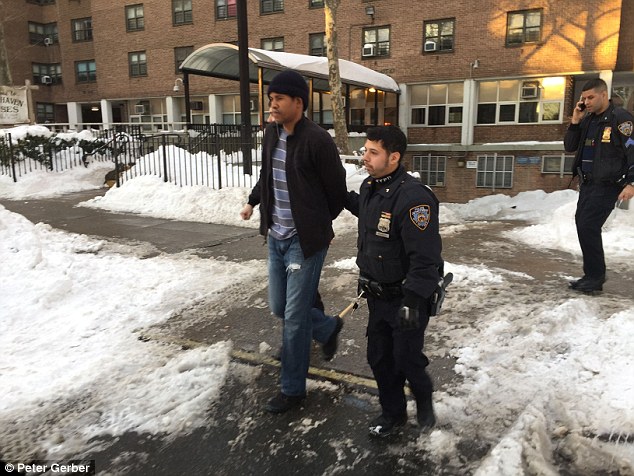 A woman was hacked to death by a man with a machete while standing in the hallway of her own building in an unprovoked attacked, say police.
The woman, identified by the New York Daily News as Carmen Torres-Gonzalez, 59, was reportedly standing in the hallway of the Mott Haven Houses in the Bronx, chatting with her mother's home care health aide on Sunday afternoon, when she was attacked by a 'psychopath,' say police.
The suspect, identified as Angel Feliz-Volquez, 25, lived down the hallway from her on the same floor.

Neighbors say she was innocently speaking with the health aide when the man attacked, chopping off her hand, and then hacking her to death with a machete, reports the New York Post.


'It’s pretty bad,' a police source told the Post. 'This psychopath chopped her hand off.'
Neighbors described the suspect as 'the mental guy.'

People who lived in the building said the unfortunate victim lived with her elderly mom.
'I heard her screaming,' another resident who didn't want to be named told the outlet. 'The screaming was really chilling.'
The suspect apparently returned to his apartment after the gruesome murder, where police were able to nab him.