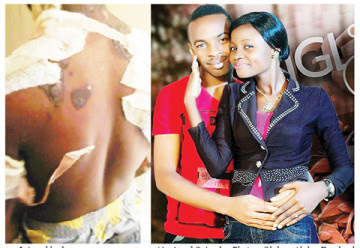 A lady, Josephine Oriwoh, is in police custody for allegedly bathing her former lover, Charles Ajayi, with hot water in the Owutu, Ikorodu area of the state.
PUNCH Metro learnt that both Ariwo, who was arrested on Saturday by the Owutu Police Division, and Ajayi were students of a university in Edo State.
It was gathered that the two had travelled separately from Edo State to Lagos to attend a wedding of Ajayi’s elder sister in Ikorodu.
It was learnt that Ajayi, who had severed the relationship with Oriwoh, came to the occasion with another girlfriend, identified only as Ogechi.
Our correspondent gathered that Ajayi later learnt that his elder sister had also invited Oriwoh, who she (the sister) thought was still his lover.
On the fateful day, Ajayi and Ogechi were said to be asleep in a room in the house, while they heated water in a bucket.
The duo were said to have heated the water, so they could mix it with ordinary water for bathing.


PUNCH Metro learnt that Oriwoh, who was reportedly infuriated on seeing Ogechi, allegedly barged into the room at about 6am, and turned the hot water on the duo on the bed.
While Ajayi’s back and face were burnt, Ogechi’s back was reportedly slightly affected.
The matter was said to have been reported at the Owutu Police Division, and Oriwoh was arrested.
The victims were thereafter rushed to the General Hospital, Ikorodu for treatment.
When PUNCH Metro visited the hospital on Monday, Ajayi, who showed our correspondent the severe burns on his back and face, said he broke the relationship because of Oriwoh’s violent attitude, and her extreme demands.
He said, “It is true that we both dated. While we were in the relationship, I spent and sacrificed so much, but I did not find real love in her. That was why I quit the relationship.
“On Saturday, we both came for the wedding. There was electricity light in the house, and then it went off, and the generator was put on. That was around 4am in the morning, I was in the room with Ogechi. We were heating water to take our bath. I just noticed that she opened the room and poured the water on us.”
Ogechi, however, declined to talk to our correspondent on the incident.
It was gathered that the matter had, however, been transferred from the division to the State Department of Criminal Investigation, Panti, Yaba.
The Police Public Relations Officer, DSP Patricia Amadin, confirmed the arrest. She added that investigation was ongoing on the matter.
She said, “Police operatives rushed to the scene, and the victims, who sustained severe burns, were rushed to the hospital for treatment. The attacker has been arrested and taken into custody.”