Jennifer Garner Is "Disgusted," Won't Return Ben Affleck's Calls After His Romance With the Nanny 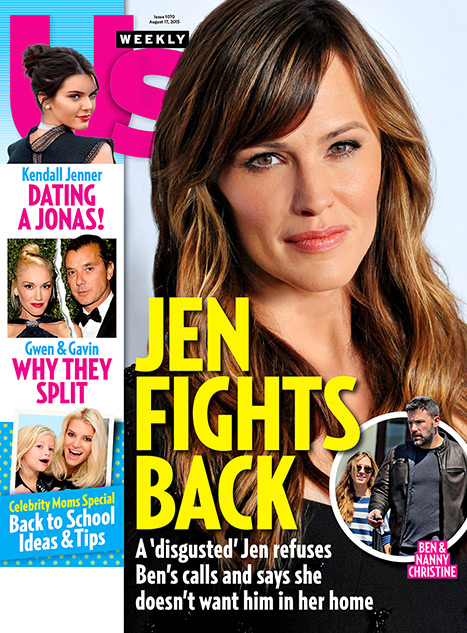 Jennifer Garner isn’t interested in listening to what Ben Affleck has to say. In the new issue of Us Weekly, a source reveals that the actress, 43, has been dodging her estranged husband’s calls since July 29 — the day Us revealed Affleck, 42, had dated their former nanny, 28-year-old Christine Ouzounian.

“She hasn’t been responding to his texts either,” a close insider says of the mom to Violet, 9, Seraphina, 6, and Samuel, 3. “She refuses to speak to him about anything other than the kids and has shut him out.”

She’s also closing the door on her previous offer to have Affleck live in the guest house on the family’s three-acre property in L.A.’s Pacific Palisades. While the close insider says she’s still considering it, another source counters that the Batman v Superman: Dawn of Justice star is now not welcome at home: “With everything that’s happened, she’s no longer pursuing that.”

As Us previously reported, the actress — currently filming Miracles From Heaven in Atlanta — was aware that Affleck had romanced Santa Monica-bred Ouzounian this spring. By then, their 10-year union “was already broken beyond repair,” says the close insider. “She was disgusted with Ben anyway.”

But learning that Affleck carried on the relationship after Ouzounian was fired — even inviting her over to his bachelor pad, just a few houses down from the family’s spread — was too much. (A rep for Affleck denies there was ever a romance; a rep for Garner couldn’t be reached for comment.) Says a Garner source, “Discovering the extent of Ben’s relationship with Christine completely changed things."