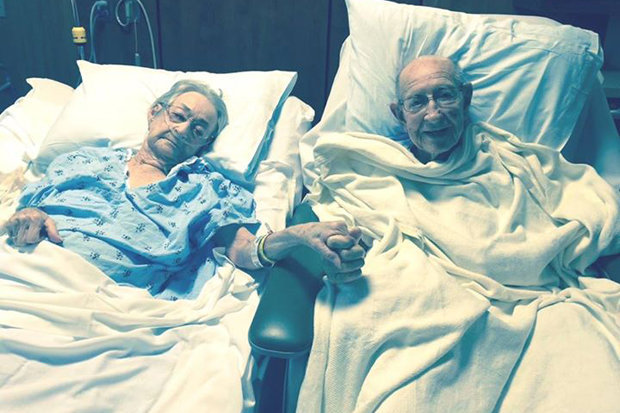 A MARRIED couple of 68 years who were both left bedridden in hospital have been reunited.

Tom and Arnisteen Clark have been married for nearly seven decades and were left crushed when they were admitted to the same hospital but were unable to see each other.
The pair had previously only ever been apart when Tom served in the US military in Korea.
But when they were checked into the Piedmont Fayette Hospital in Georgia, US, to be treated for separate illnesses they were placed in different rooms.
Tom, 96, and Arnisteen, 92, were left devastated at being deprived of each other's company.


But the situation looked hopeless until hospital director Tina Mann arranged to have the pair's beds moved to the same room.
So touched was Tom by the kind gesture that he burst into tears.
"I Just can't be away from her," Tom said.
"She's the finest woman in the world."
Charlsie Niemiec, the hospital's social media specialist, told ABC : "I believe he was brought in a couple days before she was.

"Because they were on the orthopedic surgical floor, none of those rooms have double occupancy so they couldn't be together, and it was clearly breaking their hearts.
"Tina got some help with the clinical staff to go above and beyond to get special visitation rights.
"He was able to sit there with her for a few hours every single day."
The heartwarming story was posted on the hospital's Facebook page and has since been shared nearly 2,000 times – as well as receiving over 7,000 likes.