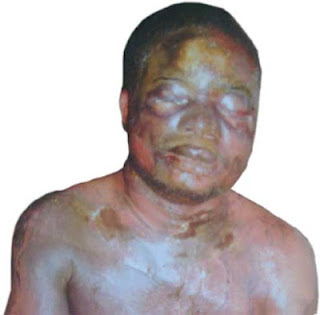 A plumber in his 40s, Steve Nwani, has allegedly poured a liquid substance suspected to be concentrated acid on his aged mother in Ahima, Alisimie-Agbor, Ika South local government area of Delta State.
It was gathered from a family source that the plumber accused his mother of being responsible for his misfortunes in life.

Nwani was said to have been facing some challenges which he claimed was because of his mother.


Following the acid bath, the victim was rushed to an undisclosed hospital where she is said to be responding to treatment.
Nwani, was said to have gone into hiding on seeing that his aged mother survived the attack, prompting police officers from Agbor division to arrest his wife.
She is currently assisting the police in their investigation.