German Police Arrest a Squirrel For Stalking a Woman 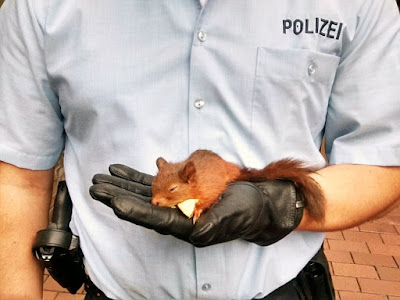 An aggressive squirrel that stalked a woman through the streets of a German city was 'arrested' by police.
The worried woman reported the 'nutty' incident to police in the city of Bottrop on Wednesday, after she thought she was being followed by the creepy creature.
After failing to shake the animal off her tail, she made an emergency call to police officers, who attended and promptly put the little squirrel behind bars.

While being taken care of at the police station, officers worked out that the rodent was showing signs of exhaustion and fed it honey and slices of apple, reports The Local. 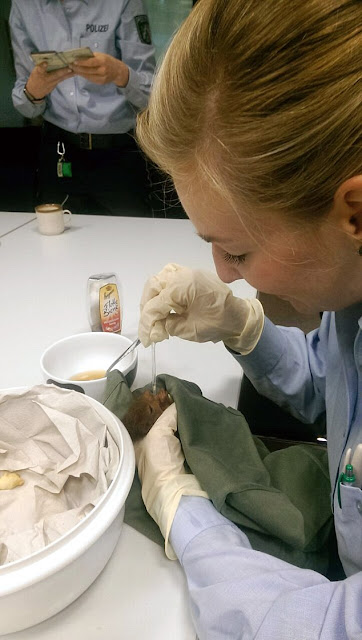 Now a video of an policewoman feeding the animal using a pipette and wrapped in a blanket has been viewed more than 300,000 times.
In a statement, the force said once the squirrel is well rested it will be passed to an animal welfare centre.

Earlier today a badly-behaved squirrel caused hundreds of pounds worth of damage at a club in Worcestershire when it turned on a beer tap and knocked over glasses and beer bottles.
Sam Boulter of the Honeybourne Railyway Club thought the bar had been burgled when he opened up at 8pm on Sunday evening - until he spotted the creature 'staggering around' after it came out of a box of crisps.
It had managed to empty and entire barrel of Caffreys ale on the floor, knocked bottles and glasses from shelves and tossed beer mats, straws and money from the bar.
Follow Me On Twitter & Instagram: @effiongeton
Posted by Unknown at 12:24:00