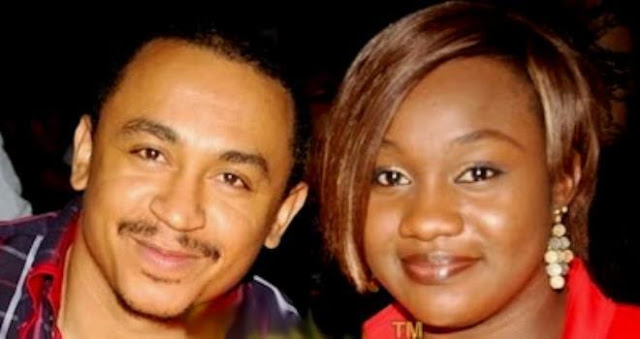 A while ago, internet went agog over OAP Freeze accusations onhis estranged wife.

The father of two took the whole day, sharing his experience via all his social media handles, lamenting how his wife has been violent to him and his parents.

The popular TV presenter and radio big boy also shared pictures of the injuries and scars he claimed he sustained from his soon to be ex-wife's brutality.

Meanwhile, in a twist of tale, his ex-wife has responded to his accusations with a press release, saying the reverse was the case.

Her statement reads below:
"PRESS STATEMENT FROM OPEYEMI OLARINDE ON THE ALLEGED VIOLENT ADULTRESS ACCUSATION BY ESTRANGED HUSBAND IFEDAYO OLARINDE A.K.A FREEZE .

I have received calls and inquiries from friends and family who have drawn my attention to the recent posts emanating from the social media from my estranged and soon to be ex-husband, Ifedayo Olarinde. .

Before now, he has tried ceaselessly and without any restraint to upset and assassinate my character but I have decided to keep my calm because it is not in my character to sensationalize issues. I would like to state here categorically that I AM NOT AND NEVER HAVE BEEN A VIOLENT ADULTERESS!

I understand that he is desperately seeking attention and publicity to generate a livelihood, but it is unnecessary to peddle lies and traumatize both the children and I in the process.

I wish him well and will still make time to pray for him despite the fact that he is keen on destroying us to make space for his new family. Thank you. Ope."