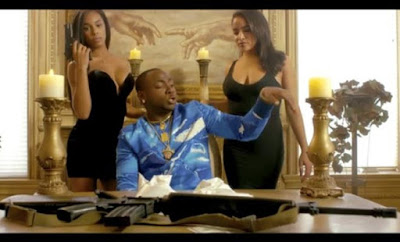 Self-acclaimed Omo Baba Olowo, David Adeleke, otherwise known as Davido, may be sentenced to prison for promoting drug trafficking in one of his latest videos, Fams Mi.
This is just as the National Drug Law Enforcement Agency, NDLEA, has concluded plans to summon the Dami Duro crooner to explain the story behind the video.
In the controversial video, Davido, an MTN ambassador tries to seal a deal with a drug dealer to supply cocaine while the dealer hands him cases of dollars for the transaction. Davido then goes back to his mansion where he can be seen aided by the brassieres-and-panties flaunting ladies preparing the ‘cocaine’.

However, the ‘cocaine’ Davido delivered to the drug dealer was only semovita (a local Nigerian food).


Mitchell Ofoyeju, Director of Public Affairs of the NDLEA, while reacting to the development, said he had watched the video and noticed it was not okay for public viewing.
He said, “The video has no positive impact on the society, no ethical message either; instead, it is evidently against what we confess. I have to this effect set up a panel to check mate him, his video, why he would go ahead with such a video where he was seen exchanging a brief case purportedly containing sedatives for dollars, exhibiting affluence which is questionable, probably based on drug trafficking or something I can’t conclude on for now’.
He went further to say that the panel will not only meet with Davido, but will also look into why the video was let out to the market when he believes there is meant to be a body that screens or edits videos or songs before they are finally released.

“All these put together will aid in investigating and verifying the necessary facts before we will give our take on the issue”, he added.
Findings by this reporter shows that if the singer is eventually roped, he may spend 15 years behind the bar or N2m fine.
Decree Number 48 of 1989, now Act of Parliament of the agency states that,”any organisation or individual that colludes with offenders to perpetrate a drug offence or to conceal proceeds from the illicit drug trade and by so doing bring the name of our great nation into disrepute is liable on conviction of 25 years imprisonment or two million Naira fine.” Meanwhile, the widely anticipated second album of the HKN boss earlier scheduled to drop on June 8, 2015, has a new date. The new release date for the album entitled Baddest is Monday, August 10, 2015.