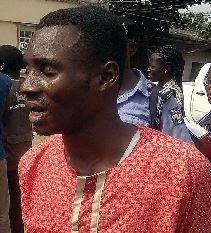 A 26-year-old prophet with Immaculate Ministry in Satellite Town, Lagos, who allegedly abducted a teenager, has revealed that he did it to liberate the victim’s family from a spell.
Parading the suspect yesterday at the Lagos State Police Command, Ikeja, the command’s boss, Fatai Owoseni, said:

“The suspect, David Ifunaya, abducted the victim for three weeks after the victim told him that her father is a herbalist. “Throughout her stay in his place, neither did he nor his victim call her parents, who were searching everywhere for her. She was later traced to the suspect’s home in Satellite area of Lagos, following which her parents reported the case to police.”

However, the suspect claimed that he did what he did to cast out a spell from the teenager. He said:

“I met the girl earlier this year and ministered to her. I told her that her family was under a spell and later gave her a handbill, which she rejected saying that her aunt would be angry with her for collecting a Christian handbill, since they are Muslims. “She, however, requested for my number which I gave to her. Since then, she calls me for prayers and counselling. I even prayed for her and she passed her JAMB exams. “When she called and told me she was coming to my house without the knowledge of her parents, I refused but later agreed because she kept pleading that she needed spiritual help. “

She also lamented that nothing was going on well for her and her family and attributed it to the spell in her family. She said she was convinced I am a man of God because since I prayed for her, things have been going on well with her.”

However, when the 16-year-old girl was approached, she stated that she was carried away by the accurate prophesy the suspect gave concerning her and her family. However, she said she was on her way to her uncle’s place on July 31, only to find herself at the prophet’s house where she stayed for eight days. She said:

“While in his house, he introduced me to his pastor as his sister. I slept in his bedroom and he never made any advances on me.”