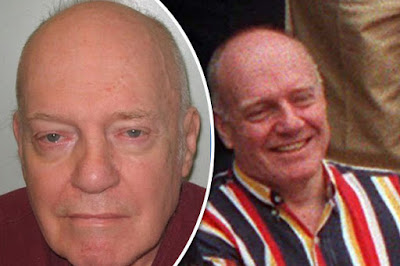 
The prolific paedophile, 75, admitted abusing 11 children – some as young as eight – between 1969 and 1986.
He pleaded guilty at Southwark Crown Court in central London to 21 sexual offences, including indecent assault of men and boys and inciting boys under 16 and 14 to commit acts of gross indecency.
He denied another three counts of indecent assault.
The offences relate to an investigation by Surrey Police – named Operation Ravine – into alleged sexual offences connected to the Walton Hop Disco, a teenage disco which ran from 1958 until 2001.

He has was caged for 13 years in 2014 after admitting abusing another 24 boys – some as young as nine.


Using his celebrity status to lure them into his clutches, he groomed boys with gifts, celebrity party invites and alcohol before molesting them.
He was one of a gang of men including former BBC DJ Jonathan King who targeted youngsters at 1970s disco the Walton Hop in Walton-Upon-Thames, Surrey.
'The Hop' was held three times a week in the small Playhouse theatre and was frequented by 'older men' despite being aimed at teenagers.


Denning had been working for King's company UK Records, but was later sacked by King.
The grammar schoolboy began his radio career at Radio Moscow before taking up posts on Radio Luxembourg and Radio London.