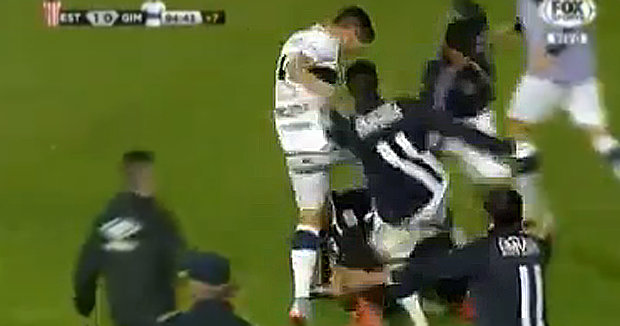 BITTER enemies disgraced the beautiful game when they had a team-on-team brawl in the middle of a friendly.

Estudiantes manager Nelson Vivas described the incident as “woeful” and admitted: “The referee may have made some mistakes but the ones who gaffed were the two teams.”


The fighting occurred near the end of the game when Estudiantes were winning 1-0 despite having two players sent off against 10-man Gimnasia.
An ambulance had already been driven onto the pitch to attend to a groggy Gimnasia player booted in the face by an Estudiantes defender who resorted to a karate kick to try to clear the ball.
Estudiantes youngster Santiago Escacibar brought the tension to boiling point with a violent tackle from behind on a rival.
The pushing and shoving as the two teams confronted each other turned into a lamentable kickboxing spectacle.

Estudiantes goalie Mariano Andújar turned into Mike Tyson and punched several rival players before being felled by a side-on right hook and kicked around the head and body as he lay on the ground.
He admitted after a cool-down in the dressing room: “It’s shameful for us, for the people who came to the stadium and for those watching on the TV.
“We can’t finish like this. I don’t know what happened but this doesn’t do anyone any good.”

The pre-season friendly yesterday/on Sunday took place just a week before the start of Argentina’s Clausura, the second of the country’s two single-round tournaments which begins after the Christmas break.
A week earlier five players were sent off during a friendly between the country’s biggest two teams River and Boca.