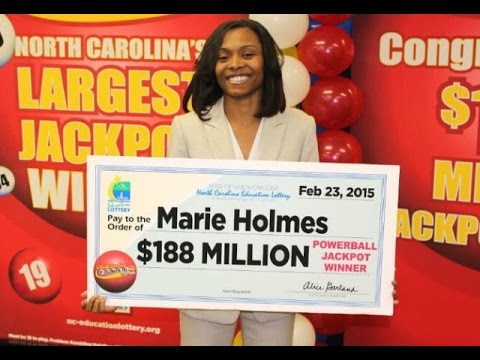 As you recall, Marie Holmes is the same chick that won $188 million in 2015 and spent millions bailing out her 31-year-old ain’t ish boyfriend Lamarr “Hot Sauce” McDow four separate times.
Now, according to ABC 11 the Powerball winner is facing her own criminal charges for threatening another woman…
Marie Holmes, of Shallotte in Brunswick County, was accused in a criminal summons of threatening another woman, Lorna Marlowe, according to ABC affiliate WWAY.


According to the summons filed by Marlowe, Holmes repeatedly called Marlowe on Jan. 10 and threatened to “inflict bodily harm.”
The summons cites two offenses: threatening phone call and harassing phone call.
Holmes made headlines with the string of arrests of her boyfriend, Lamarr McDow, 31, known as “Hot Sauce,” for drug-related charges.
Holmes won a share of the Feb. 11, 2015, Powerball jackpot worth $564 million. There were three winning tickets sold nationally for that drawing. Marie Holmes’ share was $127 million after opting for a lump-sum payment. The after-tax winnings were $87.9 million.