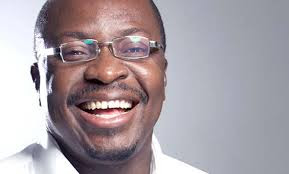 Born Atunyota Alleluya Akporobomerere, iconic comedian, Ali Baba is the pioneer of stand-up comedy in Nigeria. At 50 and a recipient of a legion of awards celebrating his consistency in the comic business, Ali Baba has grown to become a mentor to several individuals in the business who all draw inspiration from him. Married to his loving banker wife, Mary Akporobomerere, the Warri, Delta State born comic is a firm believer in mentorship. Besides raising an army of comedians who have gone on to do greater exploits, he is quick to give pep talks every now and then on brand building as he did at the recent brunch with Tosyn Bucknor, Top radio 90.9fm on air personality .
How he made his first millions
I made 1.6 million naira in 1994 from Satzenbrau as an ambassador. The company wanted to do a tour of Nigeria and needed someone who can relate with bike riders, danfo drivers, and every human being across different categories of life. I performed at beer parlours for them across different states. I was making lots of money that the press didn’t know of and I was pleased it happened that way.
It was easy for the press to think at that time that I was living off somebody. I was not also willing to reveal details to the public until I attended a friend’s lecture and he declared me a millionaire in public glare. At that time, I bought 2 piece of land in Lekki and money wasn’t the problem but how to spend it. My kind of business doesn’t have an over head cost because it was just me and the microphone. I am not in the industry where I would need a bouncer, manager, dancer and some other people I would buy tickets for to go to an event.

Positioning himself when he started stand-up comedy
The first thing I noticed at that time was that those who can pay my fee were those who earn more money. During those years, some workers earned around N300, N200 or N150 in a month while some others earned well above that in the range of N1,000 or more. At that time, I decided that those earning around N300 and N200 would find it difficult to pay my bills if I charge them N100 or more. I practically targeted those earning around N1,000 using my creative nature to drive my ambition which worked well in the end.
On how he sold his comedy business to Nigerians
Billboards blew my career. I had 2 billboards with one positioned at Government House, Marina and the other around Ozumba Mbadiwe, Victoria Island, Lagos. I paid to have the billboard there for two years and I ensured the message they carried was very simple.
Remaining modest in affluence
I was only a Tee shirt and jean person before the younger generation of comedians came into the business and started living large. It was the emergence of comedians like Teju Baby face, Julius Agwu, Basket mouth and several others that changed some things about my view of the business.
Family reactions on making money via comedy
My wife first thought I was a 419 when she realized the amount of money I was making. She didn’t believe me until I invited her for a show where I was paid to do stand-up comedy. Some of the shows might be hosted by Patrick Doyle or Yinka Craig while I was only doing standup. I learnt the ropes of being an MC at that time. But guess what, I was making more money than the MCs. It was until when she came around to see me perform on stage cracking jokes for a number of guests that she realized how much I could make doing comedy.
On younger artistes
I don’t take the shine off younger artistes. All I do is to help them grow. Most times when I get to events and I come across a younger artiste trying to make people laugh, I take a back sit to allow him do his thing. I would only find something else to talk about in such events so as not to affect his confidence.
Between comedians and Nollywood actors
Nigerian comedians make a lot of money, more money than actors. You wouldn’t believe but let me tell you. You shoot a movie, it takes four months for the movie to be released and they get paid. There is hardly an actor that charges 1 million naira or 2 million naira per movie unless you are in the top end of the hierarchy such as RMD, Genevieve, and Omotola. But then, there are comedians that charge 800,000 naira or 1 million naira per event. In four months, such comedian would have done maybe 30 events but because he doesn’t do a movie that is on cable TV that can be seen in Kenya, South Africa, and all across the country, people do not think he is making that kind of money. Actors shoot a movie and it takes a long time to wrap up. There are quite a number of Nigerian comedians whose wives do not have a job but still live large. A popular comedian would have performed at six to eight different shows in a month before a Nollywood actor wraps up shoot on the set of a movie.
The cliché ‘paying dues’ in the industry
You would have to go through the ranks before attaining a particular stage in every sphere of life. Some artists are still hustling while some others who have the raw talents would venture into the same creative business with them and probably make a name before them. Before talking about paying dues, you must have a career or talent that makes way for you. You don’t just pay dues but you have to understand what you are paying your dues for.