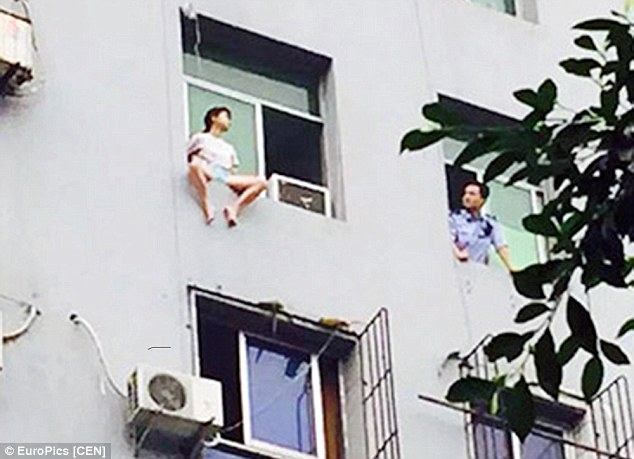 Starting life in a new town became too much for one Chinese teen whose extreme loneliness led to a suicide attempt.
The 14 year old girl, identified as Xiao Mei, sat dangerously on the window ledge outside her family's seventh floor apartment in Chongqing, western China.
She had reached breaking point after her parents refused to let her go back to her childhood home of Yunnan, south west China, reported People's Daily Online.

Local police received a report of the suicide attempt at 7:50am on July 6 and arrived to see a crowd of 200 people watching the teenager.
Xiao Mei was sitting more than 65 feet above the ground and was silent apart from the occasional mutterings of 'leave me alone'.
Her family members had been unable to convince the troubled teen to leave the window ledge.

After an hour of persuasion, Xiao finally revealed her frustrations to the police.
She said that she was an introvert and that she rarely talked to her parents. She also believed her low-grades at school were contributing to her lack of self-esteem.

Due to her shyness, Xiao found solace in internet chat-rooms and her parents let her visit the local library to access the internet in Yunnan.
However, when the family moved 550 miles away from the town in January, Xiao's world was turned upside down.
The youngster begged her parents to let her drop out of school and return to where she grew up but her parents refused and even criticised her web usage.
Xiao Mei's loneliness drove her to multiple suicide attempts and she unsuccessfully tried to run away from home on a number of occasions.
After more than an hour's mediation by the police between Xiao Mei and her family, the two parties managed to reach a compromise.
The girl's parents have agreed to take her home to Yunnan in the summer holidays on the promise that she will stop her suicide attempts.