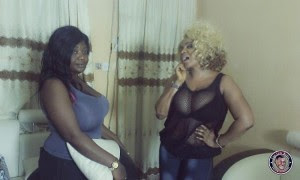 Since Potpourri broke the story of Cossy meeting  bigger boobs in Saraphina Amaechi on set of a yet-to-be released movie, ‘Ara Saraphina’, blogging hounds have been feeding off it like it was a feast of some sort. But all of them have been clueless as to the real story behind the tango. Some went with the flow that the boobs contest took place in the film, ‘Ara Saraphina’, but none could proffer the real story. -

The film, ‘Ara Saraphina’, is about a young girl, ‘Saraphina Amaechi’, blessed with humongous boobs. She becomes cynosure of all eyes wherever she goes because of this. At one time, a bad boy, named Morocco (Zubi Michaels), fell in love with her because he was smitten by the boobs. But because of the attention Saraphina gets wherever she goes, Morocco was unable to keep her all to himself  because many men also want her.


Then, an American returnee, Mathew (Chibuzor Emelu Simon) appeared on the scene and wanted Saraphina too. But this was something Morocco would not have and the duo found themselves in a series of face-offs which led to Morocco killing Mathew. Morocco was thereafter sentenced to death by firing squad. Later, he confessed he was under the spell of Ara Saraphina’s boobs and advised young men to desist from getting infatuated with girls.

While the story centres around Saraphina Amaechi, Zubi Michaels and Chibuzor Emelu Simon, there are side attractions from Ebube Nwagbo and Cossy Orjiakor. Ebube Nwagbo was the girl who was always intimated by Saraphina’s boobs, and so wanted humongous boobs of her own. She decided to have breast enlargement surgery which eventually killed her. For Cossy, hers was a cameo appearance that pitched her boobs and against Saraphina’s in a boobs contest, which she won.