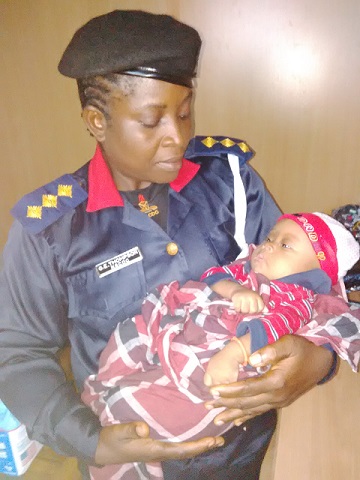 Operatives of the Nigeria Security and Civil Defence Corps, Rivers State Command, on Friday, rescued a two-month-old baby girl that was dumped in the rain by her unidentified mother.
The baby was saved during a heavy rain at about 9.20am at New Elelenwo Manifold in Akpajo, Eleme Local Government Area, by the men of NSCDC, who were on patrol within the area.
The baby, who was said to be in a critical condition as a result of her exposure to the rain, was immediately rushed to the Welfare Department of the state NSCDC, where she was stabilised by a medical team.

It was gathered that the baby must have been dumped by her mother, who ostensibly was not able to take care of her.
Speaking with Southern City News on the development, the State Commandant, Mrs. Helen Amakiri, explained that operatives of the corps had sighted a carton of Indomie noodles safely kept by the side of the road.
Amakiri pointed out that the operatives decided to stop out of curiosity and went to check the carton before they noticed that it was a baby that was safely kept inside it and dumped by the side of the road.
“It is a miracle that she is alive and healthy because when the baby was brought in, she was in a bad condition due to her exposure to the rain for a long time.
“We immediately rushed her to the Welfare Department of the NSCDC where a medical team was able to stabilise her,” the state NSCDC Commandant said.
Amakiri pointed out that the baby would be taken to the Social Welfare Department of the Ministry of Women Affairs for proper care, even as she advised young women planning to dumb their babies to desist from such act.
Describing the NSCDC as the defender of the defenceless, the state commandant urged such women to always find a way of handing over their (unwanted) babies to social welfare homes and not dumping them in places where the innocent babies could die of harsh weather conditions.
She said, “My message to girls or young women who cannot take care of their babies is that they should not dump them where they (babies) would be killed by harsh weather or dangerous animals.
“The babies deserve to live. So, the babies should be handed over to welfare homes. It is wicked to dump God-given children by the roadside or in the bush; it is sinful to treat innocent babies in such a cruel manner.
“As the defender of the defenceless, the NSCDC, Rivers State Command, has rescued the baby and she will soon be handed over to the Social Welfare Department in the Ministry of Women Affairs.”