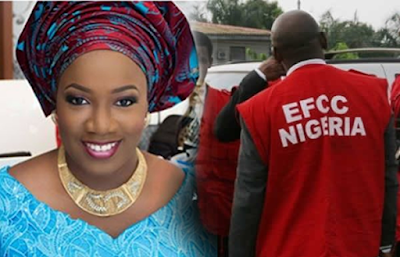 The Economic and Financial Crimes Commission has frozen an account linked to Shalewa Obanikoro, the daughter of a former Minister of State for Defence, Senator Musiliu Obanikoro.
According to EFCC investigators, about N1.2bn passed through the account which belongs to an oil firm.
Shalewa, who is a signatory to the account, was said to have personally mandated Fidelity Bank to transfer N800m from the account to another account within the bank.


A source in the anti-graft agency on Tuesday said, “We have frozen an account in which Obanikoro’s daughter is a signatory. She specifically mandated the bank to transfer N800m from the account to another account.


“We discovered that money was paid into the account at various times. The money came in N50m, N20m, N30m and various sums.
“She said the money was for oil and gas transactions. So, we have frozen the account as investigations continue. We want to know where the funds came from. At least N1.2bn has passed through the account.”
The EFCC was said to have made the discovery of Shalewa’s transactions when it was investigating the N4.7bn allegedly paid into the account of Obanikoro’s two sons – Babajide and Gbolahan.
The money, which was paid into the Diamond Bank of Sylvan McNamara, was allegedly shared among Obanikoro, the Ekiti State Governor, Ayodele Fayose; and the then governorship candidate of the Peoples Democratic Party in Osun State, Senator Iyiola Omisore.
While Omisore is in detention for allegedly receiving N1.3bn, five properties, allegedly belonging to Fayose, have been seized while his three Zenith Bank accounts have been frozen.
A house belonging to Obanikoro’s two sons in Ikoyi, Lagos, has also been seized. Obanikoro and his sons have, however, remained in the United States for the last 14 months.
The anti-graft agency had, last week, quizzed Shalewa and seized her passport to prevent her from travelling to the US.
“We seized her passport because we were told that she was planning on travelling soon. We had to prevent her from travelling since she is part of the investigation,” a detective said.
Apart from the N4.7bn arms scam rocking the Obanikoro family, MOB Integrated Services Ltd, a company headed by Obanikoro’s second son, Gbolahan, was implicated by the Aigboje Aig-Imoukhuede-led Presidential Committee on Verification and Reconciliation in 2012 over an alleged petroleum subsidy fraud.
The company was said to have made three transactions valued at N5,393,592,906.62. However, investigations revealed that the company only made one transaction valued at N3,261,263,992.52 verified as legitimate.
The difference of over N2bn was allegedly embezzled as MOB did not make the needed oil supply.
However, sources at the commission told our correspondent that after Obanikoro was appointed the Minister of State for Defence, the case was mysteriously suspended indefinitely.
The oil business linked to Obanikoro’s daughter has therefore opened a new dimension to the subsidy fraud case.
A source at the EFCC said, “Obanikoro’s case is very easy to investigate because unlike other politicians, he used his children to carry out most of his alleged crimes. Out of his four children, we have seen suspicious transactions in the accounts of three of them. There is no way these young guys will have billions in their accounts if they were not fronting for their father.”
Meanwhile, the EFCC on Tuesday grilled a former Senior Special Assistant on Public Affairs to ex-President Goodluck Jonathan, Dr. Doyin Okupe, for receiving N100m from the embattled former National Security Adviser, Col. Sambo Dasuki (retd.).
The EFCC, however, discovered that N15m was also transferred to Okupe from the account of Destra Investment Limited, a company owned by the immediate past National Publicity Secretary of the PDP, Chief Olisa Metuh, who is on trial for allegedly receiving N400m from Dasuki.
Ironically, Okupe is one of the defence witnesses in the case against Metuh.
A source at the EFCC said, “Okupe came again as usual and we grilled him over the funds he has openly confessed to receiving from Dasuki. He claims to have spent all the money but we keep making fresh discoveries.
“He received about N15m from Destra Investment Limited, owned by Metuh. Okupe is also one of Metuh’s defence witnesses. Okupe had appeared before the Federal High Court to defend Metuh and yet he (Okupe) has confessed to receiving money from Dasuki and he also collected N15m from Metuh.
“When we confronted him with evidence, he was shocked and could not respond.”
Okupe had, on May 19, 2016, told Justice Okon Abang that Metuh received N400m from Jonathan but argued that the fund could not have emanated from the ONSA.
While defending Metuh, Okupe had said, “I am surprised to hear that the Office of the National Security Adviser was used to distribute money for Jonathan’s presidential campaign. However, the President could also use his tremendous goodwill to source funds to assist his party or help to execute special programmes.
“Besides, as the candidate for election, the President has immense capacity to raise funds as a candidate. He did not use any government establishment as his pseudo-sponsor.”
It was learnt that Okupe risked being charged with conspiracy alongside Metuh depending on the outcome of investigations.
An EFCC investigator added, “With this new revelation, it is possible that Okupe knew that Metuh’s N400m emanated from the ONSA but went to court to defend Metuh in order to cover his tracks, having received N15m. We are still investigating the matter.”