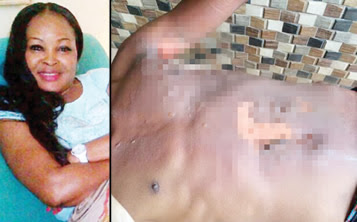 A 17-year-old houseboy, identified simply as Chidera, is currently in a Lagos hospital battling with burns he sustained after his boss’ wife, Mrs. Angela Achilefu, poured hot water on him.
The victim lives with the couple on Akinola Street, Gemade Estate, in the Ipaja area of the state.
PUNCH Metro learnt that Achilefu, poured hot water on the teenager for coming back late from an errand she sent him on Thursday.
Our correspondent gathered that the woman had sent Chidera to open her cosmetics shops in the Egbeda and Gowon Estate areas for her sales girls around 8am on the fateful day, giving him N100 as transport fare.
It was said that the boy trekked to the shop in Gowon Estate, a few miles from Egbeda, and did same while returning home because the fare was not enough.
He was said to have arrived home at about 9am, which reportedly did not go down well with the woman.


Angered by the lateness, she reportedly took the boiling water she wanted to use to prepare tea and splashed it on Chidera.
PUNCH Metro learnt that neigbours, who saw the victim with the injury, reported the matter at the Gowon Estate Police Station, leading to Achilefu’s arrest, while the boy was rushed to a hospital in the area.
The gate of the suspect’s residence was locked from outside when our correspondent visited the estate on Friday.
A resident, who identified himself only as Stephen, said the woman was released three hours after she was arrested.
He said, “The boy was in pain when somebody saw him and called other residents of the estate.
“They held the woman and alerted policemen, who arrested her. But surprisingly, the woman came back after three hours.”
Another neighbour, who did not want his name in print, said, “Chidera was brought to Lagos about three years ago from Abia State, where the woman also hails from. But she is harsh on him. She said it was just small hot water in a tea cup she poured on him and that she did it out of anger.
“She sent him to open her shops and gave him N100, instead of N200. From this street to the (Gemade) estate gate is N50 bike.
“From the gate to her first shop in Egbeda is another N50. What did she want him to do? So, he had to trek to the other shop in Gowon Estate and trek back home.”
A member of Human Rights Justices and Peace Foundation, who resides in the area, Mr. Felix Akpugo, said he was relaxing at home when his sister called his attention to the incident.
“This is cruelty that must not be allowed to be covered up. It is wickedness,” he said.
Efforts made by our correspondent to speak with the Chidera proved abortive as the managing director of the hosiptal, where he was admitted, said the Divisional Police Officer of the station had instructed him not to allow anybody to visit the boy.
“Go and see the DPO to send somebody with you before you can speak with the patient,” the doctor, who declined to give his name, added.
A policeman at the entry of the station told PUNCH Metro, “You cannot come here and make such request. It is wrong. Please, leave now.”
The Chairman of the landlords association of the estate, Mr. Tunde Oluwarotimi, said the community had left the case to the police.
The Lagos police spokesperson, DSP Patricia Amadin, said the woman was still in the police custody.
She said, “The suspect has been arrested and detained in the police station while the victim is receiving treatment at a hospital in Gowon Estate.”