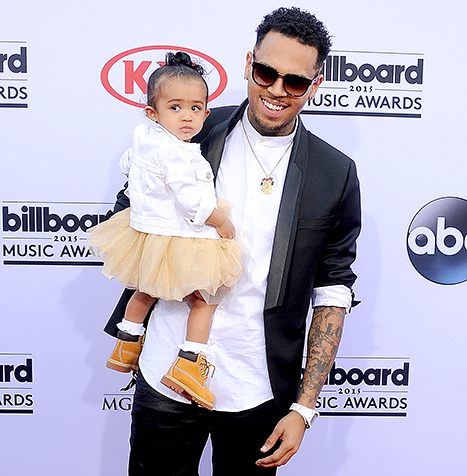 Chris Brown has gone into protective papa mode, and it's not pretty. Two months after Brown filed paperwork to establish paternity of his daughter Royalty, the singer is slamming his baby's mother, model Nia Guzman, and accusing her of using their little girl as a "meal ticket."

In an overnight Twitter rant on Thursday, Aug. 6, the "Liquor" singer, 26, seethed in two posts that insinuated Guzman was taking advantage of Brown's success for their daughter's sake. Guzman was not directly identified in the posts.

Some men my age run from their responsibility as fathers. I embrace mine. Just sucks that some females use children as meal tickets.
— Chris Brown (@chrisbrown) August 7, 2015

Using a child as leverage is never ok. The highest praise to the men who actually want their kids.
— Chris Brown (@chrisbrown) August 7, 2015

Brown found out that he was a father months after Royalty's July 2014 birth, and is said to be supporting Guzman with a $2,500 monthly stipend, despite Guzman demanding $15,000 a month.

"A lot has changed in my life, a lot of mistakes, a lot of lessons learned. The best thing, I'm most thankful for is my daughter," Brown, who fathered Royalty while he was dating then-girlfriend Karrueche Tran, gushed at the 2015 BET Awards. "At the end of the day, love is love."

At least on social media, Brown appears to be making good on his intentions to stand by his little girl. "I honestly never knew I could love someone as strong as I do," Brown said in May. "I'm gonna give her the world."