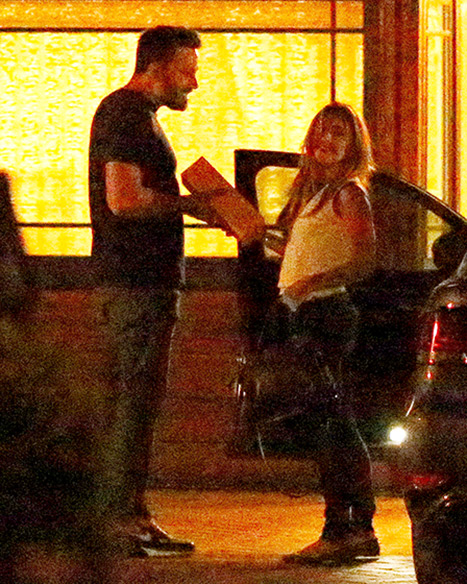 In the photos - which were first exclusively revealed in the Aug. 10 issue of Us Weekly - Ouzounian, 28, is seen chatting with Affleck, 42, with a champagne bottle in hand. Other pics show her driving the actor's Lexus and keying in his security code at the gate.

"He was clearly happy to see her," an eyewitness previously told Us. "Ben walked out just as she was pulling in. He had a giant smile on his face. They were gazing into each other's eyes."

As Us exclusively reported last week, the Oscar winner and the Arizona State University grad began dating while Affleck and Garner were separated. A friend of Ouzounian's told Us: "She says Ben really, really likes her. She’s saying this is true love." (A rep for Affleck tells Us "all allegations of a romantic relationship are baseless and untrue." Ouzounian couldn’t be reached for comment.)

Affleck and Garner, 43, hired Ouzounian from a posh Beverly Hills nanny agency this spring for their three children - Violet, 9, Seraphina, 6, and son Samuel, 3. Garner let Ouzounian go when she caught wind of the romance.