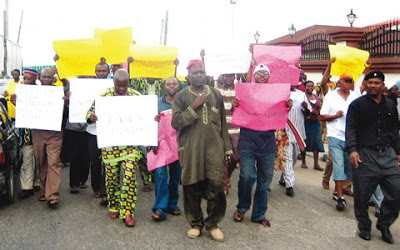 The Association of Senior Civil Servants demanded a minimum wage of N46,000 for workers.

The union’s Secretary-General, Mr. Bashir Lawal, in Lagos State, on Wednesday, said that the existing N18,000 minimum wage was too little to meet the socio-economic demands of workers.

According to him, they arrived at a minimum wage of N46,000 per month after the union met with the National Public Service Joint Negotiating Council.
He said,

“In the past one year, we presented a proposal for salary review to the Federal Government but the government said that the price of crude had fallen. “We argued that if the price of crude is 30 dollars per barrel and the resources of the country are well managed, money will be enough to pay workers decent salaries.


“From the memo we submitted to the NPSJNC, we computed what it will take for an average worker to survive and we arrive at N66,000. “So, we took 75 per cent of that and we arrived at N46,000 minimum wage.

Lawal said that the new minimum wage demand will not cause crisis in the economic sector, he said:


“If the government believes that the amount will create crisis, we will tell them what to do to ensure that everybody will be carried along.”