Qatar, Luxembourg and Singapore Are the Three Richest Countries in the World

Three of the world's smallest states have been named as the richest countries in a new study.
Qatar, Luxembourg and Singapore came top in the research which ranked countries by their wealth according to their gross domestic product.
Both the U.S. and Australia made the list's top ten but Britain was named the 23rd richest country behind states such as Ireland, Taiwan and Kuwait.

Despite its recent financial troubles, Ireland was named as the world's 13th richest country with GDP coming in at $42,806 (£27,493)
Meanwhile Britain was named 23rd richest, with the figures showing GDP as $37,501 (£24,086)
At the other end of the list, the Democratic Republic of Congo was deemed to be the poorest country with GDP of just $394. 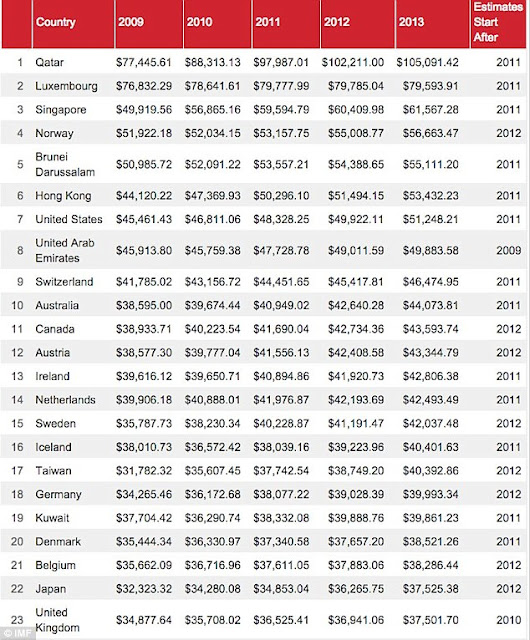 Zimbabwe, Burundi and Liberia were also named among the poorest countries.
The report says that measuring a country's wealth is useful for foreign investors, traders and potential immigrants.
It added: 'Countries cannot share responsibilities for global public goods—the environment, security, development assistance and global governance—without meaningful assessments of the real size of their economies and the wealth of their people.'