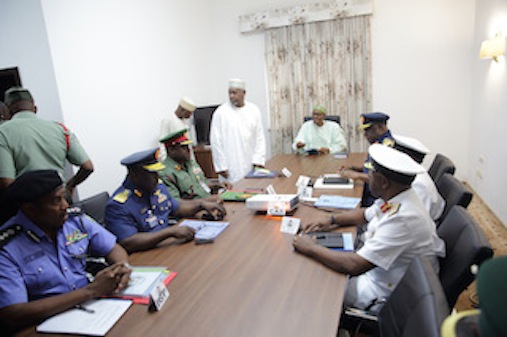 President Muhammadu Buhari has fired all the military service chiefs. Presidency  sources  said  military chiefs of the Nigerian  Navy, Army, Airforce and the Chief of Defense staff have all been told to ste aside by the president.
Presidential spokesperson, Garba Shehu confirms to Saharareporters that the President has asked all the military chiefs to go.
Special Adviser to the President on Media and Publicity, Mr. Femi Adesina, said this while speaking to State House correspondents on Monday that their replacements would be announced later. The move was widely anticipated as former general Buhari has made cracking down on Islamist militant group Boko Haram his number one priority.
The Chiefs are Chief of Army Staff, Lt.-Gen. Kenneth Minimah, The Chief of Naval Staff, Vice Admiral Usman Jibrin and Air Chief Marshal Alex Badeh.


Adesina, who did not give more details, added that the Presidency was preparing a statement on the sacking, which would be made available to newsmen.
Their replacements had neither been named as of the time of writing this report.
There has been an escalation in terror attacks by Boko Haram militants in the country in recent times, leading to the killing of more than 500 people in less than four weeks.