Pastor Who Forced His Congregation to Eat Live Snakes Arrested 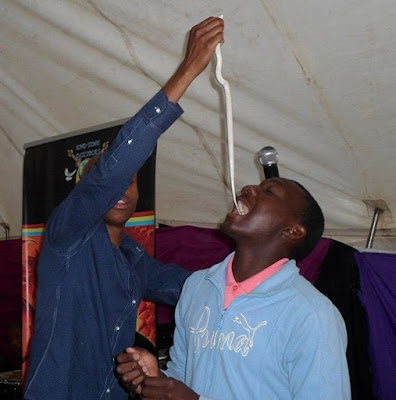 The South African pastor who forced his congregation to eat live snakes to test their faith has been arrested.

In photos posted by the Endtimes Ministries on their facebook page,pastor Penuel Mnguni, who calls himself a prophet, was seen dropping snakes into the mouths of people who had come to listen to him.

He even claimed that under his order God had turned the snakes into chocolate.
The photo caption read:

"Those with small faith eats only vegetables but the ones with a great faith eats everything.During service Man of God commanded a snake to change into a chocolate and it obeyed. People ate it and enjoyed it."To God Be The Glory!"
Mnguni, whose church meets in Soshanguve, in Pretoria, South Africa, was arrested after the Society for Prevention of Cruelty Against Animals opened a case against him.
SPCA inspector Mishack Matlou said:

"We are conducting a preliminary inquiry with an intention of opening a criminal case against him.What we saw in the pictures is cruel."Imagine being eaten alive!
"This has to stop.“He (the pastor) has now been charged with animal cruelty and will appear in court on Monday."
But Mnguni defended his actions and was reported to say:

"I don't keep reptiles in my house or church. "I catch them when I need them."God gave me the power to turn them into chocolate."
Earlier this year he posted photos of worshippers stripping their clothes off and lying down in front of Mnguni who then trod on them.Mnguni apparently told those gathered:
"God placed Adam and Eve in the Garden of Eden with no clothes on, and because they had faith in the Lord, they didn't even know they were undressed".