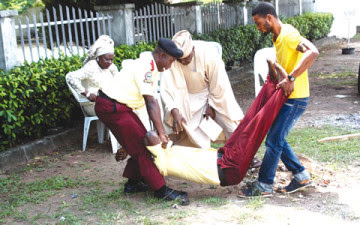 An official of the Lagos State Traffic Management Authority, who slumped while controlling traffic on Ishaga Road in the Idi-Araba, Mushin area on Saturday, has died.

PUNCH Metro learnt that the official, Kazeem Lawal, was brought in dead to the Randle Hospital, Surulere, where his colleagues had rushed him.

Sunday PUNCH had reported that the official, who was among LASTMA officials on duty for an event at the Chapel of the Healing Cross, collapsed at about 1.30pm.

It was also reported that Lawal, who was gasping for breath, was rushed to a hospital after he did not respond to preliminary treatment.

Our correspondent gathered that Lawal, who was attached to LASTMA Zone 3, Iponri, died on the way to the hospital.

The matter was said to have been reported at the Alakara Police Division.


One of the colleagues of the deceased, who spoke to our correspondent on condition of anonymity, said, “He was initially taken to the Lagos University Teaching Hospital, but he could not be attended to because of the ongoing strike action. He was then rushed to the Randle Hospital where he was confirmed dead.
“We do not have any insurance policy. We do not have any hazard allowance. It is very painful.
“His family members are in disarray at present. We work round the clock, and we are usually overwhelmed. He must have collapsed from accumulated stress.
“Since the government sacked some LASTMA workers last year, there has been a burden on the workforce. Work posts, where seven personnel were handling, have been reduced to one or two.”
Our correspondent gathered that LASTMA officials, policemen and National Union of Transport Workers besieged the hospital on Sunday.
“The whole thing happened so fast and so shocking. By the time they took him to the Randle Hospital, he had died,” another LASTMA official said.
The Lagos State Police Public Relations Officer, DSP Kenneth Nwosu, said he would get back to our correspondent on the matter.
He said, “I am still awaiting details on the incident. I will call you back when I have them.”
The Public Relations Officer, LASTMA, Bola Ajao, could not be reached as calls put across to her phone did not connect. A text message sent to her also had yet to be replied to.