Former NFL Player's Mistress Kidnaps & Kills his Wife, then Herself 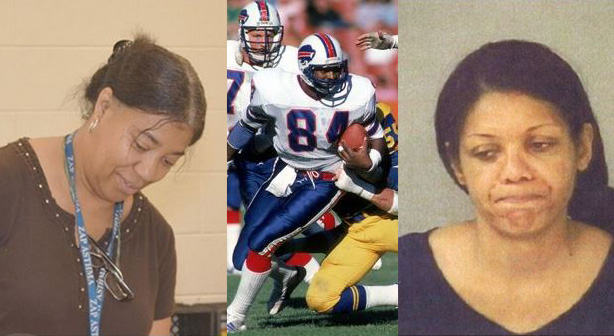 This is just awful! The Clayton County police have announced the death of former NFL player Buster Barnett's wife after his girlfriend kidnapped and killed her before killing herself in a bizarre chain of events.


"Sandra was actually on the telephone with a friend when Lisa showed up at the front door. Lisa Brown was even driving a vehicle owned by Buster."

Carroll County authorities spotted the Dodge Durango on Thursday and began a chase on Interstate 20 that spanned into Alabama. Alabama State Patrol troopers joined in when the chase crossed state lines.
Lisa Brown had learned of a trip Buster had planned with his wife. She wasn't too happy about them going away together which probably ignited her to go after Mrs. Barnett. As the chase grew hot, the Durango suddenly stopped in the middle of the interstate at mile marker 208. At that point, authorities said Brown shot Sandra Barnett and turned the gun on herself.

Sandra Barnett was a teacher at McNair Middle School for more than two decades.

"Everybody just remembers this bubbly, happy spirit -- just happy," said co-worker Nimet Muhammad. "Every day at work, you could just count on her.

Neighbors said they grew suspicious when they saw the Durango outside of her home on Wednesday. They said that Barnett had recently replaced a lock on her gate that she believed someone had tampered with.

"We've uncovered a set of handcuffs and some receipts," Gandee said. "Lisa Brown had purchased the handcuffs prior to this kidnapping." Coworkers told 11Alive's Matt Pearl that Barnett's husband is Buster Barnett, who played four seasons with the NFL's Buffalo Bills from 1981 through 1984, according to NFL.com. He attended Jackson State University.