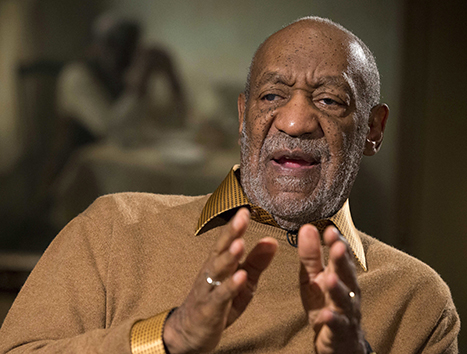 Disturbing new details surrounding Bill Cosby's past have come to light in The New York Times' latest piece on the comedian's previously hidden court deposition. The case, which wrapped in 2006 and was settled on undisclosed terms involved Andrea Constand, a young woman who accused Cosby, now 77, of drugging and molesting her.

At the time, 13 other women had come forward to support Constand, claiming they too had been molested in the same way by Cosby, but the case was settled, and Cosby's deposition went unnoticed until it was recently obtained by the Associated Press and the NYT.

At one point in the proceedings, Constand's lawyer, Dolores M. Troiani, addressed Cosby, saying, "I think you’re making light of a very serious situation," to which he replied, "That may very well be."


Throughout the proceedings, the once-beloved sitcom star insisted that he was good at telling when another woman gave her consent.

"I think I’m a pretty decent reader of people and their emotions in these romantic sexual things, whatever you want to call them," he said, later adding, "I think Andrea is a liar and I know she’s a liar because I was there. I was there."

Constand and Cosby interacted in the early 2000s; he had been married (with five kids and three grandchildren) to Camille Cosby since 1964. When asked how he initially wooed Constand, Cosby replied, "Inviting her to my house, talking to her about personal situations dealing with her life, growth, education."

He also recalled inviting her to an intimate meal at his Pennsylvania home. While there he admitted, "I take her hair and I pull it back and I have her face like this. And I’m talking to her ...And I talked to her about relaxing, being strong. And I said to her, come in, meaning her body."

But he then said he didn't try to kiss her because he could tell she didn't want to. Cosby went on to say that at their next dinner they had a "sexual moment," but clarified they did not have intercourse.

He claimed that he often avoided intercourse so that women wouldn't fall in love with him.

Cosby described sex as, "something that I feel the woman will succumb to more of a romance and more of a feeling, not love, but it’s deeper than a playful situation." And in the case of Constand, he claimed they were "playing sex, we’re playing, petting, we’re playing."

Their relationship continued for several years until one night Constand claims Cosby drugged and molested her. He said he only gave her one and a half tablets of Benadryl before they kissed and had sexual contact, but her lawyer persisted that it was a much stronger drug.

Constand moved away, and after Cosby spoke to her mother on the phone, he became concerned that she would embarrass him so he offered to pay for her schooling.

Cosby admitted to paying off several women and blocking magazine articles so his wife wouldn't find out about his dalliances.

Also in the deposition, he recalled pursuing a model named Beth Ferrier in the 1980s, asking about her father who had died of cancer.

"Did you ask her those questions because you wanted to have sexual contact with her?" Ms. Troiani asked.
"Yes," Mr. Cosby responded.

But throughout the court proceedings, Cosby insisted that he was morally upstanding, noting that after his encounters with women, he never bragged.

"I am a man, the only way you will hear about who I had sex with is from the person I had it with," he said.

These new details come from the same testimony in which Cosby admitted to obtaining Quaaludes and other sedatives in order to give them to women to have sex with him.